Well here we are at the end of another glorious summer and as the nights begin the slow draw down towards real Autumn weather I still wonder where our summer days escaped to. Funny how the things you look forwards to often fail to materialise or is it just me having a temporary run of bad luck!!

Still, whatever the weather, as the days shorten and our swallows pack their bags for another long haul flight to Africa the bigger Perch are starting to show up on the lakes. Some years they do take some finding and last year was no exception but this season we have had plenty of fish to just under three pounds in weight, which is a great big Perch by anyones standards. The curious thing is that almost all the big ones at the moment seem to be around 2lb 12oz. Only a few above and not so many of the next year class down. Mind you on five pound line and a trundled worm these fish give a real hard fight right to the side of the boat with several long runs and that lovely thump thump head shake that signifies another specimen perch somewhere deep below the boat. We also get a fair number of pike on the trundled worm and while there is an inevitability about losing the occasional pike it’s surprising how many we do get onboard.

This year as always we have had some fine roach as well -mostly on vertical maggot feeder fishing with a quiver tip rod in 18’ of water. Most of these fish look as though they have never met an angler and are excellent specimens with perfect colouration and deep fins. Generally these are the usual silvery colour but we have had a few this summer which are a deep bronze golden colour looking almost oil painted. I wonder whether these might not be roach/ rudd hybrids as we do have a few rudd in the lakes these days.The one in the pictures section took a double maggot last week on Derwentwater and came as part of a hundred plus fish day with at least two pb. perch and several fine ‘ordinary’ pound plus roach plus a couple of bonus pike. Just a grand days fishing with lots of bites and a few heart stopping moments when another big fish pulls the rod way down towards the deeps. All we really needed was a trout or a big eel to almost complete the full set of Derwentwater fish!

The Trundle Rig is a great way of catching fish from a boat on the lakes and Trevor Harris, one of my clients has very dilligently tracked down a film I made a while back about the basic rig and its use. it also shows how to safely unhook deep hooked Perch as well using forceps. Here’s the link:

and thanks toTrevor as I didn’t even know it was out there and also to Phil Williams who made the film.

NB: Any comments about the old fishing tackle and the shocking state of ‘The Doghouse’ will be met with derision!

Beyond all that the trout fishing continues to be good up in the hills and as the rain keeps on coming I’m still enjoying the salmon fishing on both the Eden and the Derwent. Not with huge successes but just enough to get the old ticker thumping along. Mind you with my run of luck at the moment we will probably have a drought when my annual barbel hunt on the Wye comes along but never mind, sometimes it is just good to be out fishing…and of course if we do get a warm back end (oooh Matron!) I can always go carp fishing before the real winter pike fishing starts up in November. But that is for next time.

Meanwhile stay safe and enjoy the last days of ‘summer’. 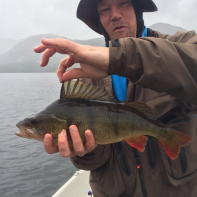 And another good one for Ross Errington 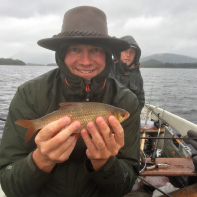 Roach or Rudd? or a bit of both