Well you never quite know what will turn up next when fishing in the Lake District, and a recent day on Derwent water with Chris Bakker had us utterly amazed and delighted when a well trundled worm was grabbed by a fabulous fish on only the third cast in twenty feet of water. It was one of those mornings when you look at the weather, assess the wind strength and direction, think about other similar days when the signs and portents looked and perhaps more importantly, felt similar. Then you make a calculated decision as to just where to start the days fishing.

Last time Chris and I fished together was the day I mentioned way back last autumn, when we struggled on Windermere in huge waves and wild weather but as so often, there is a balance in life, and although we didn’t know, it was about to tip our way….

In this instance the day was fairly calm for a change and a few small fish were seen dimpling on the surface so I opted for a place where several changes of depth intersect at the edge of a broad plateau area. After a few quiet mooches around to position the boat we settled down on the edge of a twenty five foot slope where the lake drops steadily into very deep water. I like these type of places for all sorts of reasons -mostly because they often produce good fish of all sorts, but it is not always possible to anchor in the right direction to fish the slope properly. So often the wind renders such swims unproductive or as on several days this last week, just unfishable because of the wind strength blowing up big waves more akin to sea fishing than a pleasant summers day on a lake. So to be out on a calm morning was a rare treat this year in what seems like The Land that Summer forgot. First cast produced a couple of taps to a worm on a trundle rig then the next cast resulted in a fine bristling perch of a little over a pound so we were feeling pretty hopeful in the Doghouse. As I set the other rod up and settled into the start of the days fishing preparing forceps, spare bits and pieces and began mixing some groundbait to pull in the small stuff, Chris dropped the rig a fair way out towards the edge of the shelf. A slow retrieve then up came his rod and hooped over as he lifted into something decent. After a few seconds the something decent set off and kited way out to the left. Nod, nod on the rod top and I thought perch, then the fish changed gear. Fast. It raced away and kept going and I had second thoughts about it being a perch. With the speed at which the fish set off Chris couldn’t keep up with it and the handle raced round as the clutch screamed and I thought seriously about upping the anchor and following whatever it was he had hooked.

It says much of the man that he kept his cool and to be honest I was probably more concerned for the outcome than he was, but eventually after several heart stopping minutes we had a glimpse of a long and deep golden flash as the fish came very reluctantly towards the boat.

“It’s a Trout!” I shouted and my excitement must have been very contagious as the fish set off like the clappers once again.

I’ll not bore you with the delighted angler and grinning guide bits of the story, but it was a cracker of a trout, and on a size 12 hook and four pound line was a real trophy catch. After the pictures were taken, we held it in the water for a second and it was away, safely back into a world we do not fully understand, a fact for which I am truly grateful.

It took a while to recover our sanity that morning but we fished on, grinning periodically in the way that happy anglers do the world over. By lunchtime we had had over fourty perch above a pound in weight with at least a dozen two pound plus specimens. The afternoon was quieter as often happens when a busy feeding spell is over, but the smiles remained. Which is why I just had to share it with you. To meet fish of that calibre, admire them for a priceless moment, and then watch as they slip unscathed back to their mysterious world, remains an absolute and continued delight.

Oh yes and we have had lots of other good perch as well on other days. After all, it is the season of boyish perch fishing, for kids of all ages. 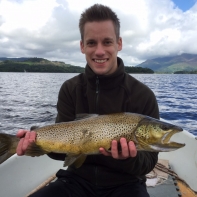 Bearing scars from a pike attack in its youth ..A trout meets Mr Bakker 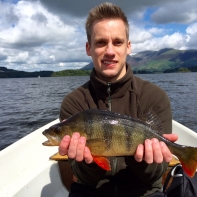 Who also catches several of these 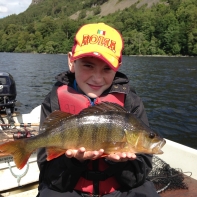 Noah shows his Grandpa how its done!