Well here we are the day after bonfire night and the days are drawing rapidly shorter. I’m down on the big lake as of tomorrow for another search for the fabled beasts that live in there. In spite of all the negative publicity Windermere has had in recent times, with forums saying it is not what used to be and it’s finished as a pike fishery I still look forward to my sessions down there. Yes it can be hard, and there some days when we wonder what the heck we are doing fishing it at all when other waters will almost always produce a run or two. But then the baitrunner clicks or the float twitches just a little, then the hours of waiting become worthwhile because it might just, possibly, maybe, perhaps be the pike of your lifetime. And for that I’ll put up with an awful lot of atrocious weather, and waiting around while the kettle boils and the year and I grow older.

To be honest I prefer the spring fishing as there are times when there is a hint of warmth in the day but there is a certain traditional magic about those sepia toned autumnal afternoons when the world seems to be holding its breath before another Atlantic depression sends the last of the leaves scurrying for cover. And anyway, I could think of a lot worse ways to while away an autumn day.

Talking of leaves, I had a fabulous trip down to the river Wye the other week when the river was low as I have seen it and the autumn colours were absolutely stunning. In spite of low water and generally hard fishing ( reports from the Wye and Usk foundation beats we were on suggested nothing was feeding at all) we had a great time. As always with a three day session you go through a whole range of emotional ups and downs, from the initial optimism in the car park then the slow decline as the reality of the fishing settles in! In this case my mate Bob had a good first day with a five pound chub and a couple of good barbel to just over nine pounds as well as losing a few in the snags but I struggled to get a bite, in spite of fishing what seemed a good swim just above an overhanging tree with trailing branches and a barrow load of snags. With the score of one tired looking chub I was a thoughtful bunny as we hit the bar that evening for a steak and a pint. Next day we visited the tackle shop in Ross to replace some of the load of feeders eaten by the slabs under the tree and came away with no real upturn in confidence as the owner had agreed with the web reports- low water and few fish. Typical!

Undaunted, Bob returned to his snag pit swim while I opted to go a searching. First couple of spots brought no result but after lunch a move to a pacey looking reach towards the tail of a long slow pool with nice flow, a bit of cover and as I quickly discovered, a snag free gravelly area on the far edge of the current. After twenty minutes of feeding the gravel area with a right old mix of barbel favourites, the tip gave one of those tremulous quivers that suggests something investigating the freebies before a fabulous pull of a bite. As I was touch ledgering the rod was hooped over in a micro second and the first of the afternoons fish came reluctantly to the net. Next day we fished upstream of Hereford and managed only another couple but with a tally of sixteen fish including three nines and two eight pounders evenly shared between us it made for a cracking trip. I came away with a head full of autumn colours and the tranquility of the whole river filled my dreams for days afterwards. I even considered moving south for a while before a seven hour traffic snarl up made the journey home a harsh return to reality!

Now though its back to Windermere and we’ll see what that can throw at us.

If you’re interested, I’m doing a talk and slide show on Wednesday 18 Nov down at Carnforth for a new PAC group. So if anyone wants a break from Wednesday night telly come along it’ll be good to see you.. it’s at a place called the Canal Turn pub and it starts at 8.00 I think. I’ll be there from seven to get set and sorted so if you’re bored come along I’m sure you’ll be most welcome. 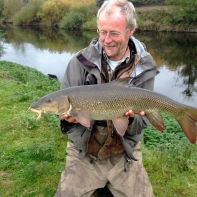 Nine and a half pounds of Wye wonder 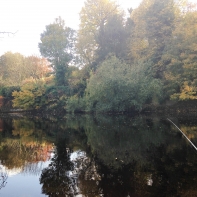 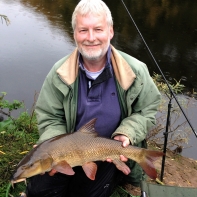 One from Bobs’ snag pit