Yes the weather forecasting community tell us we are still in meteorlogical summer, but no-one seems to have told the actual weather. Unless of course you have been tucked away in some micro-climatic corner of Britain, you will not need me to remind you that this years summer has been awful.! But, even though there have been lots of times when industrial waterproofs have been required, there have been some great fishing days both out on the lakes and down the river as well.

Traditionally up here in the Lake District summer is the time for perch fishing and while we do get a few big ones early summer as demonstrated by a Windermere three pounder back in June it is late August and September when we see some the best of the fishing. So far we’ve had a few good ones including a grand looking two pounder from Grasmere caught by Betty Mc George who now cites herself as the perch Queen of the Mc Georges clan, as well as a couple of hundred fish days on Derwentwater with some specimens to a similar size.. Pike have also stayed active as the water temperature has been kept below 18 degrees by the chily summer so all is not doom and gloom and the cloudy days have meant the surface lure fishing has been very productive. Great fun for junior anglers as they can see how rod movement affects lure behaviour as well as the excitement of the take on the surface when the lure is engulfed by something big and toothy!

Best of all though is that with the volumes of rain we have had the main rivers have been running steady at a great height for migratory fish to be travelling, and we have been meeting a few summer salmon. Historically the best runs of fish up here used to be in the Autumn but with shifts in climate and ocean current changes we are now seeing fish appear in reasonable numbers over June and July. My mate Phil had two sea liced salmon in successive days on the Derwent and I had a bright sea liced eleven pound fish the other week that gave a right old scrap and a few heartstopping moments on a seven weight fly rod. The next week I was back with the real salmon rod and sneaked a fourteen pound fish from the same area. Which answers the old question of what does a fishing guide do on his days off? In my case when I can (and the jobs list is low) it is either stalking carp on the surface or preferably salmon fishing. I find there is something very therapeutic about casting a long fly rod and easing the fly back round across the current of a decent sized river like the lower Derwent. Even if there’s nothing to show for my efforts I am a calmer and perhaps better man afterwards. Maybe it has something to do with the logical futility of trying to catch a fish that is both weird in its habits and also does not feed on anything in fresh water but whatever the outcome I still love it, and at this time of year when so many of my days out are with families and youngsters it makes a great change from unhooking fish and impaling worms!

I even took our Harrison and Sofia trout fishing up at Gilcrux last weekend on my only day off in ages- brilliant fun and the smiles say it all!

Meanwhile, another busy week ahead with a mix of fishing including a visit to the high tarns in search of trout, more kids days and who knows, I might even go salmon fishing! and shock horror gasp…..it has stoppped raining. 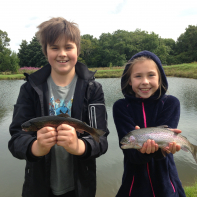 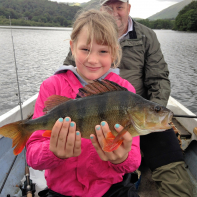 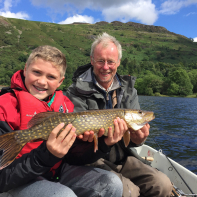 While Josh gets hooked!