There’s a great Don Henley song called ‘Waiting in the weeds’ and no, it’s not dedicated to pike of enormous proportions but it does have the line

‘Just coming on the end of August, another summers promise almost gone’

and I really understand the sentiment as up here we are really waiting for it to start!

The pike have settled into serious sulking somewhere deep down but the perch are seriously absent and it does make me wonder what on earth is going on with our lakes and rivers. Perhaps its just a cyclic thing but where as last summer we met hundreds of bigger than average perch with good numbers above two pounds, this year there seem to be hardly any showing on a regular basis and the average size is around seven or eight inches. It can’t be a huge fish mortality thing as we would surely have seen the evidence, and I doubt even cormorants would take fish of that size but it really has got me scratching my head. So anyone out there in fish watching land who has any ideas please get in touch. For my part I’ve contacted the Institute of Freshwater Ecology who have a team out doing regular surveys on fish populations of our Lake District fishing waters and look forward to hearing their reply.

Meanwhile in spite of met office promises of heatwaves, we still battle with cool lake temperatures, blustery winds and I’m having to work hard to put good fish into the boats.

Even the monster Bassenthwaite Perch are missing having a good time somewhere else!

Not all doom and gloom although I did lose an estimated three pounder this afternoon which just came unstuck, and we have had some nice fish and some fabulous days out with youngsters of all ages.

Here’s a couple of ones that didn’t get away!

Sorry it’s a short blog post but I’m too busy plotting tomorrows fishing trip to spend time on the web. Go Careful and I’ll see you around on the lakes or rivers. 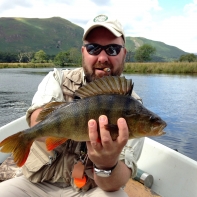 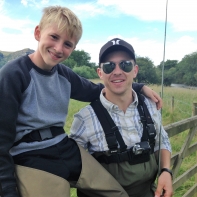 Will and Brad – the happy trout anglers 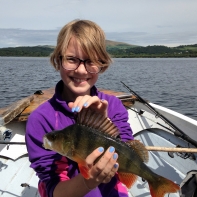 Recognise this Girl? Its that one again but now older and still outfishing us!