Apologies to both my regular readers and the three other visitors who come and check out what I have been up to. AS many of you are well aware, generally I do not post pictures on here or on the Hemmingways facebook page ( yes there is one of sorts!) at the time of capture, because there are shrebbenous wretches of an unscrupulous nature who trail round trying to find short cuts to great fishing….., and one of the problems with this techologically interconnected world is we run the risk of losing all that is special by over exploitation. and good fishing in particular is exceeding vulnerable.

So now the moment has past and I have got that off my chest …Here is the news: We’ve been having some great fishing days both out on the lakes and the rivers in what at times have seemed appalling fishing conditions with hot sunshine and clear blue skies. Great for sunbathing but not so good for fishermen. The lakes have been plagued by eastery winds which have made life difficult and the chilly nights have spoilt many an evenings fishing, whilst frost in early morning means we have had to wait till later in the day for fish to put in an appearance, but when they have….

So here’s a couple of trout pictures off the lake caught and returned on consecutive days by Paul Hall and Daniel Kennedy on what seemed very difficult fishing weather. I don’t really bother about weights but some fish are simply great to encounter and these were great fighters and went back in pristine condition….now if we only devise a method of getting them to take a fly off the surface , that would provide some truly memorable angling adventures!

Meanwhile, down on the river we have also had some fabulous sessions with good wild brown trout to well over three pounds and a fair number of twos as well. We even watched a salmon in gin clear water idling its days away in a shrunken river Derwent just above Cockermouth. It was commented that it must have caught a bus to get there as the river has been so low for so long but it was re-assuring to see it anyway, and no we didn’t try and catch it. Sometimes it is enough to know these fish are there.

I also had a session carp fishing last week- sad I know but with no boilies in sight and just a loaf of bread and a few dog treats I had loads of fun ( remember that?) no carp – they made it into the tree roots and came off, but a seven pound Tench more than made up for it!

But I’m off early in the morning fly fishing for pike and we have had some rain which makes all the difference!

I’ll let you know how we get on and apologies to those of you who hoped to see your fishy pics on here…you’l just have to wait.- I will do a bumper summer special; if I get a moment, but don’t hold your breath….just the memories. Anyway there’s the best of the pike fly and lure fishing to look forward to and then there are those huge perch to find….hmmm.

so tarra for now. 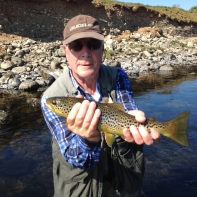 Nice fish for Lister Fielding on a dry off the river 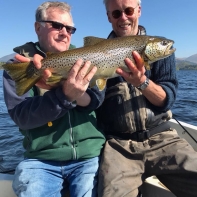 While we had this off the lake 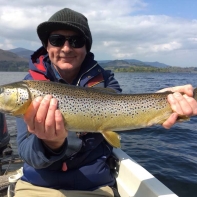 And also this one the next day..!