AS many of my regular visitors to these pages are well aware, I love summer perch fishing. In some innocent way it brings out the youngster in so many of us and in spite of all the lousy weather and the vagaries of winds and rain we have suffered this so called summer, the perching this year has been simply outstanding.

It can be a tricky business locating these creatures in all the square miles of water that make up the Lake District, after all there is an awful lot of water to search and even drifting along with either drop shot or trundle rigs you can still have a struggle to find the better ones. I used to think that it was case of simply find the larder areas where long strand crispy weed reaches the surface, feed it up a bit to get the little ones interested, then catch fish. and while this approach will lead you to the bigger perch, you often have to wade through a shed load of smaller stuff to get the real good ‘uns. But recent seasons have seen me take a wider view of the whole perch fishing caper and as with most of my angling exploits over the years there has been a lot of experimenting going on along the way. In the end I have learned much about the behaviour patterns of these fabulous fish and so far this year have been delighted to have met not far off a hundred two pounders and over a dozen above the magic three pound mark. While I have yet to net a four pounder this year I do feel it is only a matter of time.

Now I realise this might sound like a lot of bragging but it is just the way it is, and best of all is that these fish have come from several Lake District waters suggesting the methods and techniques work in a widespread sort of way and that our overall perch populations are in a good state at the moment. Mostly, we will have to catch a few dozen smaller ones to get above the two pound mark as different year classes come and investigate our offerings, but the other day when out with one of my long standing perch hunters we had a curious one where the small stuff was absent. After an hour in a suitable location (which is everything and of which perhaps more later) we had only one small 6” fish. However we did have three two’s and one three pounder as well as an argumentative pike. During the next few hours the tally increased steadily and by fishing a trundle rig diagonally across and down a slope into 35’ of water every little while we would have a slow tap. tap, tap, then after a pause, have a very subtle pull and on the lift another big perch argues it’s way to the net. You know when you hook a big perch, especially the really big ones, as the rod hoops over and there is that fabulous thump thump, on the rod top. And the biggest ones really do power away on long runs with total authority, giving plenty of heart stopping moments . It is never a foregone conclusion as even with five pound maxima the odd one comes off, but that day they almost all came in successfully. Remarkably for perch, each one was lip hooked meaning they all go back in pristine condition. I have never been one for the numbers thing but that day we must have had over a dozen ‘twos’ and four weighed in the bag three pound fish. And what stunning beautiful perch they were.

Eventually sport slowed down as a large shoal of roach moved in to take advantage of the groundbait, so we switched to vertical quiver tipping and enjoyed a couple of hours roach fishing. With roach having quietly invaded most of our Lakeland waters they are an untouched resource and the ones we caught were up to a pound or so but each was scale and fin perfect and had obviously never met an angler before. Glowing in the sunshine there seem to be two different types in the lakes- one bronze tinged and the other more silvery but they are all proper roach and a welcome bonus catch on an early autumn day.

Just goes to show…Pike are not the only fish worth targeting! 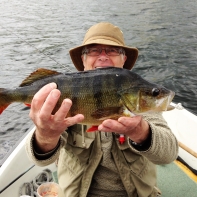 Lawrence Greasely and his biggest so far 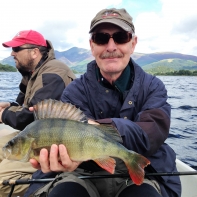 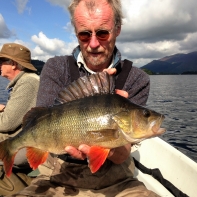 And this is what I mean about stunning fish. 3.3