Back from the Highlands and there was a serious need to do something different after freezing my anatomy catching pike in arctic weather, and fortunately I have had a few weeks of trout fishing clients booked in. With conditions improving by the day we have had some great days out on the rivers recently this season and it has made a great change and a total pleasure to be out travelling light with my trusty Guideline Fario five weight fly rod, instead of fighting the elements on a wild Loch Awe.

My mate Bob Day and I headed over to a favourite beat of the Eden for a days salmon fishing the other week, and in spite of, or perhaps more likely because of a chilly wind and damp rainy afternoon, we witnessed one of the best hatches of olives for ages. The trout really made the most of this annual feast and although there was little to show for our efforts early in the day once the fish switched on after lunch we had a couple of hours of the most fantastic dry fly sport in ages. At times we had fish rising within a rod length of us and at any one time, for a while there must have been over a dozen feeding fish within easy reach of both of us. It really was one of those memorable sessions where the fishing was as good as we could have wished for, and some of them were very big trout indeed. I lost one well over two and a half pounds when it screamed across the river and threw the hook on a high arcing jump more akin to a sea trout than a brownie, and Bob had a nudger three pound fish that just would not come to the net. Best of all was the condition of all of these trout. Superbly fit and well fed which was very re-assuring after all the huge waters we have experienced this last winter and goes to illustrate how perfectly well adapted these creatures are to surviving whatever mother nature throws their way.

Down on the Derwent there is a similar story being told with some fine wild trout about – Lister Fielding had a couple of good ones the other day on both dries and nymphs while I had to move downriver yesterday because I was being plagued by salmon smolts and parr dropping down river. This later fact is hugely encouraging as we did think many of the smaller fish had been left high, dry and dead across the fields of Cumbria by the gargantuan waters following the big storms of last winter.

So all might not be lost on the salmon front..providing of course the migrating juveniles survive the long journey past the west highland salmon ranching areas, where hordes of sea lice wait like bandits above a canyon to intercept the innocent.

Anyway, less of this, I have a rod room to finish painting and with cloud forecast for this afternoon I might just get back out for another look on the river. And not only is it warming up……THE ROAD TO WINDERMERE HAS RE-OPENED. at last !!!! 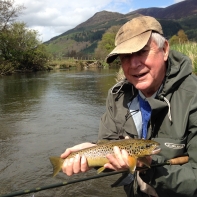 Another one the dry fly for Lister Fielding 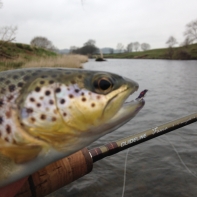 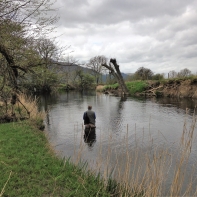