With the weather here in the Lake District finally relenting and some days at least feeling like summer, we have been busy upsetting a few fish of the spotted variety on our local rivers. Time was when an average local trout on the Eden or Derwent might have been a nine ot ten inch fish, and an exceptional one perhaps fourteen inches long, but that was in the days before folks realised the value of our wild fish stocks and began putting them back to live another day. These days with almost all of our trout anglers returning brown trout we do have some much bigger specimens lurking down the river. Whist not always easy fish to catch, every now and then we do get it right and of late we have had some cracking specimens.

One of my very first clients from many years back comes up each year for a few days trout fishing in May and each season seems to get a few bigger trout than previously. As with most of my clients, Lister has developed and honed his fly fishing skills over the years and has become a very good trout angler indeed, as well as posessing that lucky streak which coupled with determination and stealth puts him in the front row where catching good fish are concerned. We had a couple of days on the Derwent the other week as well as a day down at Eden Lacy and in spite of bright sunshine and chilly nights we managed several good fish with the best couple being closer to three than two pounds. Now a three pound wild trout is a fair adversary on a light trout rod and the two in the pictures below gave us a right old run around. The first was off the KAA waters and took a small green beaded caddis larvae pattern while the other fish is one of several we found rising in a smooth glide on a lower river beat. .The trout was picking off Olives in a crease just off the far bank and took a well presented Half Arse in a lovely confident rise.The ensuing battle lasted a good five minutes of long runs and at least four big leaps before we drew it over the net. Having lost a big fish a little earlier, Lister took no chances with this one which was just as well as it was a real bruising fighter and a solid example of a wild brown trout. Photographed, admired and returned it kept us smiling long after the hatch had ended.

With conditions seeming settled for a while yet I have several more days booked in for sessions down the river and am looking forward to meeting a few more good fish. There are also Mayfly hatching on Derwentwater and I have seen some good fish feeding on the spent insects in the evenings. With luck I’ll get out there with the fly rod one day this next week or so and see what I can find. I have a few Mayfly patterns left over from days on Lough Corrib which were tied a few years back by the late Martin O Grady, with whom Ian G and I shared a boat on some fabulous trips over there. They worked a certain magic back then and with Martin having gone to the big Lough in the sky earlier this year I’m hoping the old magic is still there.

Magic or not it will be fun trying and with a couple of carping sessions with a fly rod in the offing I’m looking forwards to the next few weeks. It should get my arm up to strength for the annual Windermere pike on the fly weeks which are waiting in the wings of the month.

Go careful, get out there and go a fishing, I am!! 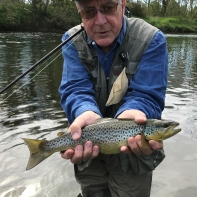 One on a trundled caddis nymph 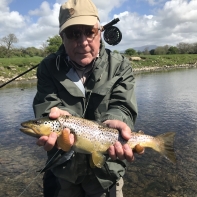 The Half Arse does it again!! 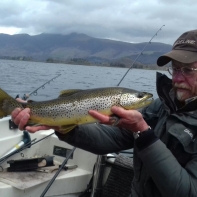