In case you’ve been off the planet, or loafing on a sunny beach waiting for the tide to turn and a shoal of exotic high speed fish to swim past, we poor souls in darkest Cumbria have endured a long, cold winter and snow still streaks the fellsides. As a reuslt of all the extended wintry stuff much of the natural world seems a few weeks behind and even though the first of our swallows returned yesterday, it’s still chilly out there. In spite of all this, there has been some excellent fishing sessions of late and although Windermere didn’t produce the numbers of huge fish I would usually expect, it remains a favourite place to be out fishing and I look forward to June when I am back down there for our annual lure and fly fishing weeks.

As we push into the second week of April most of the Lake District pike are busy spawning and even without a close season on our lakes,I think they are best left to get on with their reproductive business, and anyway, I’m enjoying some good trout fishing sessions with folk at the moment. Apparently though according to the weather presenters on the telly, we are due a heat wave next week. Who knows, I might even get the thermals packed away, but then again…maybe not just yet!

With trout in mind though I’ll be down the river over the next few weeks and hopefully enjoying some of the great trout fishing we have up here. The Eden and Eamont in particular have some cracking fish which offer some superb dry fly fishing ovet the ‘spring’ months.Even our local river Derwent has been providing a few heart stopping moments in recent years with some very big trout inded running up into the river from the Bassenthwaite. I spotted one sipping olives one day last April when I was walking the dog down the river, and it was a huge fish. Tucked away in an almost inaccessible corner I guessed it was a good three or four pounds and I watched it feeding steadily for half an hour before the trout dropped away out of sight. Returning a few days later around the same time of day I crept up to the corner with anticipation running high as there was again a steady trickle of olives hatching. There in the same spot a fish rose, once then again ,and I crawled stealthily into position. Extending line I was about to complete the cast and deliver the fly to the unsuspecting fish when a movement from upstream caught my eye. As the line began its descent towards the trout a shoal of canoes came merrily down river, waved and apologised for disturbing my fishing. As the ripples subsided I looked across to where the fish had been waiting and it was gone. Reeling in there was an awful lot of mutterring from under my beard, but as with many aspects of being an angler in these fabulous places, sometimes it is enough just to know these creatures exist. And hopefully, without canoeing intervention a trout of similar proportions will be in residence next time I’m down the Derwent. And as with the enormous Eamont fish that came off one day last year a hundred yards down stream from where I hooked it, I’m getting quite excited at the prospect of a return encounter.

Meanwhile- here’s a few more pictures from recent days out. , 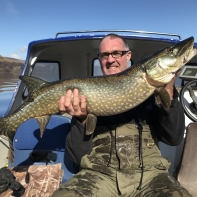 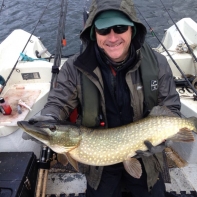 Phil Done does it again 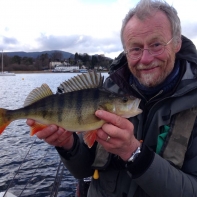 While I get a surprise on a Jerk bait