It is something I have been pondering on for many years now,. That eternal deep question of…..Just why do some anglers manage to get far more than their fair share of fish?. Is it dedication, skill, baits and presentation, good tackle or something strange and unquantifiable? Al Rawlings over in Ireland catches loads of good fish and reckons that catching big pike is all down to the phases and times of moon rise and fall. Others maintain that air pressure has a bearing and suggest that low pressure makes for good dead bait fishing conditions and high pressure is best for trolling. This is all well and good if you can drop everything and go fishing when conditions are spot on but for most of us ordinary anglers we have to make the best of it when ever we can.

Phil Done, one of my regulars and a Loch Awe stalwart who has appeared on this blog several times in the company of some good fish has come up with a great theory which I’m increasingly drawn to as getting somewhere near just why we catch specimen fish at some times and not at others. Now this might sound like I’m spending far too much time alone and waiting for the green van to take me back to the ward but bear with me and I will explain…..

Fact number one: Pike and other big fish are clever creatures but in a different way to humans and know we anglers are trying to catch them.

Fact two (possibly) They live in a parallel universe connected to this one via worm holes.

Three: When they realise we anglers are not really trying or are distracted by other things they come through the worm hole and suddenly because they are there, they become catchable.

Proof: You sit and wait for ages for a run. Nothing happens until you pour a cup of tea or coffee, have a pee or are distracted by something else like spinning a new trace together or daydreaming. Then with no warning zzzzzzzz the baitrunner sings or the float stands up, twitches then slides under as another monster of the deep sets off with the bait.

And there you go…the wormhole theory. Which with hand on heart is the only real true theory that is proovable. If you doubt it…go fishing, sit and wait for ages as per usual, then try pouring a coffee. RRRRuzzzzz and you get a run!.

Here’s a couple of fish from a remarkably lucky two days on two different waters with a twenty pounder from Windermere followed by a day of 14 fish including a 19lb pike and this 8lb+ trout from Derwentwater.

Tarra and stay safe and lucky, 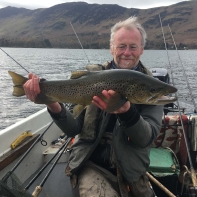 ‘Jammy git’ does it again 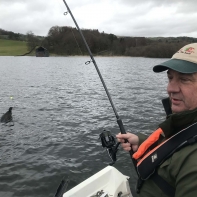