There are some days in life we remember well- birthdays and significant anniversaries being a couple of examples.( that is apart from men and wedding anniversaries!) Others for fishermen of a certain age of which I’m one, might well include such dates as the sixteenth of June which, when we had a general close season, was the opening day of the coarse fishing season. After three months of not fishing, or being obliged by law to become a serious trout angler, the ‘glorious sixteenth’ as Bernard Venables called it, was eagerly anticipated and dreams of huge catches of monster fishes swam through and haunted our sleep.

Such was the attraction of opening day that on occasion anglers of all ages were known to become violently ill with what we now know to be a twenty four hour bug, and had to take a day off work or even missed school. But recovery was easy and we were usually back the next day with a good excuse and a head full of yesterdays adventures. Most of the time the opening day didn’t live up to expectations but as with good holidays, just looking forwards to it was almost sufficient in itself. Traditionally we would start the season by fishing for Tench, losing ourselves in an anglers dawn. An idyllic world of mist wreathing off the water like the souls of long dead anglers drifting past the water lillies, as we searched the surface for clouds of tiny bubbles which showed where the Tench were rootling the mud in search of food. Occasionally we did indeed have superb hauls of fishes but mostly the fish were happy feeding on their natural food and wisely ingnored our offerings of maggotts, worms and Mothers Pride. This year though I did something different and in the company of one of my Loch Awe regulars went out Pike fishing. Traditionally Pike are often thought of as fish of the winter months but there is a short window of opportunity some weeks after spawning when they feed hard before sleeping it off over the warm days of summer. And if you are fortunate to be in the right places there is some very good fishing to be had.

The sixteenth of June 2017 was indeed glorious and a heatwave crept over the land. It even reached the Lake District and Phil Done and I set out insearch of pike on a warm and slightly overcast day that made us think of Tench, but the pike were waiting. I’ll spare you the details of screaming reels and epic battles with good fish but with several fish under our lifejackets by the end of the day, including two Eighteen pounders teased out on lures by Phil and a few on the fly as well, we had a most memorable sixteenth of June.

I was out again a few days later and another cracking days fly rodding for pike resulted in over a dozen fish to the boat including yet another best ever pike on the fly for Matt Healey who nobbled a memorable fish of 18lb.12oz. Not bad from a lake that is eleven miles long!

So it is sometimes a wise move to break with tradition- to try the unusal and be just a little bit different. Mind you having booked a couple of day Barbel fishing in the autumn down on the Wye there are some tradtions I will stick with, and anyway, I’m going fishing for Tench this evening!! 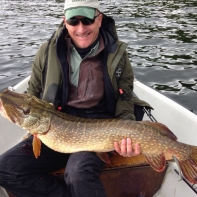 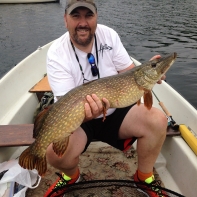 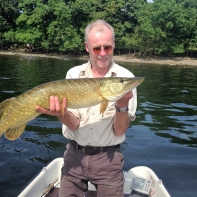 While I sneak another on my trusty pike fly rod