We have had a few days of almost good weather up here in the Lake District, and apart from very chilly nights there has been a hint of summer in the air. As a result the fishing has been pretty good with some fine fish showing up on most of our waters. Trout fishing has ben excellent on occasion with some good two pound specimens showing up on the Eden tributaries and also on the Derwent but best of all have been the numbers of salmon showing up. At the time of writing, the Eden has had over two hundred fish to twenty pounds plus which is encouraging news given the drastic falling away of the overall salmon population in recent years.

I had a session down on the Derwent with Tony Gooderham and as we were working on his double spey casting, a big bar of silver crashed out in front of us. Always good to see when one does this, it gives huge encouragement to us all when you realise there are actually ‘fish’ in the river. Mostly when I see one come right out like this I tend to not bother fishing directly for them as they are rarely ‘taking’ fish. However, after an hour or so I thought there might be a chance and with the river being fairly low I doubted the salmon would have run beyond the security of the deep hole it was lying in, so we returned to the pool.

A good cast across as a demonstration of how to tackle a known resting place, mend the line gently, and as the fly begins to swing over the lie there was the best take I can remember as I felt the fish chomp on the fly (twice) before turning away on a steady pull. Lifting the rod there’s that wonderful nod,nod pull, and we’re off!

I passed the rod to an amazed Tony- “there you go…Deal with that!” and much to his credit, he did.

Cradled in the shallows twenty minutes later, the fish was around 14 lbs and one of the finest deep bodied fish I have seen in ages glinted in the sunshine. A few pictures and away she went strongly. Fabulous!!

Meanwhile back on the lakes, the perch are switching on after their later than usual spawning. Recent trips have seen some good two pound fish coming aboard and with the best is stiill to come in july and August we are optimistic about the stocks of these great fish. With water temperatures being low for the time of year, many species seem to have delayed their annual mating this season and I hear from Mr Mordlock of huge shoals of roach in Windermere’s south basin gathered up for spawning. No doubt Mr and Mrs Pike will be hanging out on the edges of these gatherings to make the most of this annual feast and well worth targetting for a few weeks more.

Otherwise the 16 June approaches and I’m looking to have a traditional dawn tenching session on what used to be the start of the new coarse season. In many ways I think the close season was a good idea giving things chance to settle into a few months of quiet. But it is one of those dates when I can remember exactly where I was fishing right down the years….Like an anglers Christmas Day…Hmmm, wonder what I’ll get this year?

Pike is pike and a smile is a smile 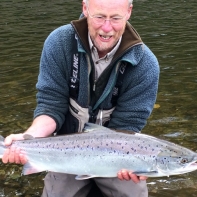 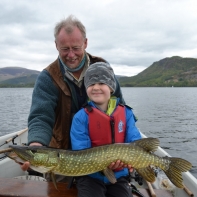 and another happy angler in the making