Well we hope so anyway! As I write this on the day when we move the clocks forward there is a vague hint of springtime in the air. Certainly the wildlife and fish think so and have been showing the effects of the longer days with birds carrying nesting materials and many pike in our local lakes well into their spawning rituals. I often wish we still had a close season on our local lakes as I do believe that spawning fish are best left well alone at this time of year. Not everyone might agree and I do see lots of pikers sitting right on the spawning sites in the hope of connecting a bigger than average fish, but to my mind hauling a spawnbound fish into a boat or onto the bank just to satisfy someones ego might not be the best thing for the future good of our fishing, so I’ll often go and target other fish instead. Trout in particular are showing up in good numbers and sizes on many of our local rivers at the moment as well as out on the lakes. The lunchtime period down on the Eden in particular has seen some good hatches of Olives coming off and wise anglers in the know really look forward to the trout fishing at this time of year. It can be very civilised fishing in its way, as you can be on the river before lunch, make the most of the surface feeding with the dry fly and pack up around mid afternoon when the hatches peter out. Thus leaving time to attend to those domestic issues you’d temporarily put to one side because the need to wet a line had to be satisfied and you were in danger of becoming a grumpy bunny.

It’s ok you know, others also suffer this odd affliction where you just need to go fishing, and are a better man or woman as a result of doing so, so you are in good (or questionable) company!

Mind you, recent events have made me seriously wonder about all this fishing business. Don’t panic I haven’t turned against angling in any way because I love fishing and firmly believe that if it were not for anglers our rivers and lakes would be full of shopping trolleys and rubbish, but I have been playing about with an underwater camera in recent weeks and the resulting films are utterly astonishing and have really got me thinking. We are all aware that carp in particular are supposed to be a wise sort of a creature and capable of learning about baits and the risks associated with eating certain foods, but we are also led to believe that fish have a very short memory- the goldfish in the bowl seven second memory is often mentioned. But, and believe me this is a BIG BUT, from what a mate and I have been seeing on film this is absolute and utter nonsense. Because pike and presumably other fish as well, do seem to think about consequences. I’m not giving too much away here for a while but when you see on film a twenty pound pike come up to investigate a sea bait that has just dropped through thirty feet of water, approach said food item, swim round it, give it a waft with its fins and blow it, before pausing over the bait to visibly consider things before swimming off into the distance, it really gets you thinking.

I filmed one on Derwent water yesterday that came to investigate as I retrieved a wobbled bait a little distance behind the camera. The pike weighed around ten pounds I guess, and it shot into view as the bait dropped back after I had lifted the rod. At first I was convinced it would take the sprat but instead it swam alongside it, looked at it, then rubbed the whole length of its body against the bait, before it turned and bogged off! I felt nothing through the line and would have had no idea there had been anything happening below the surface. As I said earlier it is absolutely fascinating. So for a while the House Rod is being fished with a camera, bait and no hooks. I hope I never figure it out but it does add to the great mystery of what goes on beneath, of which we have so little understanding.

Meanwhile here’s a few fish that did get fooled. 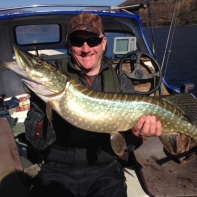 Phil Done on a sunny day 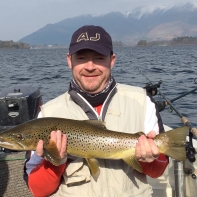 Pike are not the only fish! 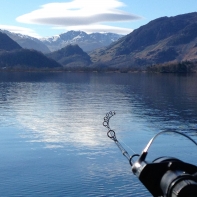 Stunning views, but what lies beneath???