Dont you love March? Those calm balmy days of soft cloud and spring blue skies, when there is a promise of the first sunburn and feeding fish warming up after winter. Buds are swelling and bursting on the trees and meanwhile, down the river, trout rise for gently drifting Olives in the middle of the day..

Then the alarm goes off and I wake up to hear wind battering the window yet again and almost horizontal rain blasting past the house. This year March came in like a lion in the Lake District and with snow still streaking the fellsides it looks determined to go out the same way. I’m getting sort of used to winter staying later these days but that doesn’t mean I like it. Roll on real spring and some easier fishing weather for a change.We have lost a few days fishing recently due to storms and the occasional early season trout sessions have been a cold sparse affair, with chilly winds keeping surface activity to a minimum and nymphs and bugs and spiders saving the day. Hopefully though once things do warm up we will have our fair share of excellent Lake District and Eden valley trout fishing and April is always a good month to be down the river.

In spite of the weather though, the early Pike fishing has been more than a little kind to us. The Windermere fishing was at times very slow going but on those occasions when it switched on and we could get out safely there were some fine fish to be had. I know I have said it before, but even though its is a hard water at times, there is a decent average size of pike to be caught in Windermere and while I don’t publicise catches till well after the event, we do very well.. Apologies if you are one of those unfortunate anglers who just picked the wrong day- it’s just how it goes and there’s not much I can do about that. While I take great delight in sliding the net under another battling beast from the deeps for my clients (and occasionally me as well on the truisty house rod!) there are some days when the fish just do not seem to feed, and we all struggle. For those who are into statistics (and can say the word!) my annual spring sessions with clients this year produced 46 pike with over 80% being over ten pounds and for a while an average of 19lbs…!!!. There was a particular hot feeding period during this spell when we had boated 8 twenty pounders in six days fishing and I don’t know of another water that can offer such quality specimens. Curiously though, we didn’t get anything over 23.12 so where the real big ones are I’m not sure. Maybe I have been unlucky but I’m not complaining although the top weight average does seem to have dropped in recent years. This might just be one of those things but it would seem to tally with a drop in the number of salmon returning to the system . The effects of this decline in very good pike food has been noted on other pike waters- Bassenthwaite in particular used to hold huge pike but a combination of similar factors together with human and cormorant predation has lowered the top weight significantly in just a few years.

Anyway, less of the doom, gloom and thoughtful stuff, it’s not long now till I’m off to Loch Awe for another week of serious fishing. We’re going as a smallish group of five this year and hopefully the weather wil treat us fairly as we try for some more of the legendary hard fighting lumps that inhabit this marvellous expanse of water. Between then and now though there’s those trout that have been swimming through my dreams so I’m tying up some more half Arses in readiness.

AS always stay safe and get out there- there’s fish to be caught. 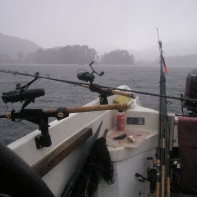 It’s Grim up north… in the distance is Matty Ropers’ boat in sleet. 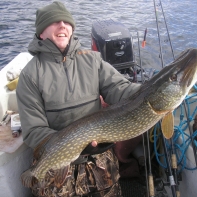 Another PB to Dale Mordlock 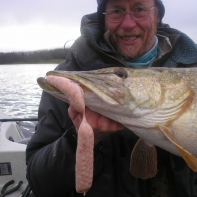 One on the Cumberland sausage rig at last.!!!