It’s is the changing of the seasons, and in spite of very little rain since the end of March here comes Autumn. It is the end of a long and exceedingly dry summer when lake levels have been at rock bottom and the surface temperature has on occasion reached 24 degrees!

Now while this is great for sunbathing and swimming it’s not so good for fish and even the bristling perch have struggled in such temperatures. Fishing generally was really slow and we had to work hard to find hungry fish. Meanwhile the poor old Salmon were drifting back and forth on the tides providing easy feeding for seals and dolphins down in the Solway. A tragedy really as we had such a great salmon season last year and the resulting youngsters will have been decimated by our feathered friends in what’s left of the rivers.

As always though little lasts for ever and with a return to cooler weather the perch have been feeding again with several days of dozens of good fish to a range of methods there are some happy anglers around.. Not always the expected tactics either. The latest hot  and very unusual way to target perch has been the ‘Ned Rig’. If you haven’t heard of this one you are not alone but Phil Done and I have been using it for a while and it does work. To me this is just the daftest way of catching perch I have seen in ages as it involves casting out what is essentially a bouyant stick of plastic with a flat jig head on the end. When you cast it out the rig sits tail up on the bottom of the lake and fish just swim up and eat it!- Told you it was daft!

it’s so daft I never thought to pass it on to our ever popular guide  Matt Keys. He was out recently with Rob Lattimer ( a different one!)  and was amazed at the technique. We can all learn from others and fishing Guides are lucky enough meet some good anglers. Keep it quiet but Matts tackle rack is growing rapidly!

However,  as the perch will move into deep water very soon we will leave them alone till next year. They are still catchable but their swim bladders erupt with the change in pressure as we bring them up, so for the sake of future generations of both fish and anglers we leave them alone. Besides which it’s  back down to Windermere soon for some Autumn  fishing. This October I’m determined to find the bigger bream that are in there. We had lots of middling ‘nodders’ last year (they do nod on the rod as you bring them up through 30′) but having seen some far bigger ones rolling I have a hunch as to where I might track them down. If Not…  well we will just have to go and catch pike!

On a different matter, the Mortimer and Whitehouse feature on BBC2 was well received- lots of positive feedback and I even got a speaking part, which was unusual as most episodes you only see the back of the guides head.

Thanks for all the nice comments. Much appreciated.

We did catch fish but with five feet of extra water in the lake and temperatures down to three degrees it was never going to be an easy task.

Anyway, less of my ramblings. Stay safe and don’t forget  there’s still something nasty out there, but take care and we’ll catch you later.

Eric (who is going off to do a rain dance or three cos I want to go salmon fishing!) 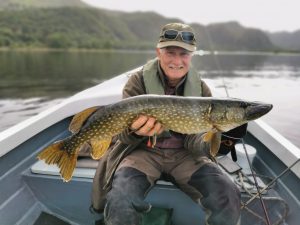 John Pelham does it again 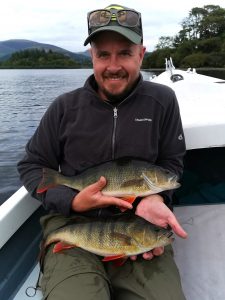 Another Rob Lattimer and a brace of good ‘uns 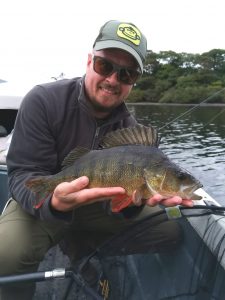