Well, what can I say? A complaint has actually been logged and it is all my fault!. Mind you it was not about anything trivial like bad guiding, poor tuition or shabby tackle, instead it was a serious complaint that in spite of a suggested promise to be included in this blog… I failed to include Phil and Tom’s cracking day out we had last summer. They arrived this spring for a day piking and as we sheltered in the cabin drinking tea and putting the world to rights on another day of shocking weather and dreadful fishing conditions, a comment was made of the hours they wasted trawling my web site looking for a non existent mention. So by way of an apology there are two pictures at the end of this update featuring said anglers with a couple of lovely summer pike !!

In truth I had intended to feature them but the fishing last summer was on occasion so fabulously good that other spectacular catches outshone their summer pike. Being good sorts though I had to do something, besides which they are gearing up for a new life in British Columbia setting up a guide business and one has to keep in with the right people! Once they are up and running I’ll check it out for you all and if it’s as good as I expect, I’ll set up a link to their business.

Beyond all that we have been exploring the ‘spring’ fishing on Derwentwater. Not that there has been much spring in the air as mostly the weather has been utterly dreadful with gales, snow and frost seeming to be the normal day. I usually check the Mountain Information Weather Service site for the Lake District as its is the most accurate and for the first time last week they actually described predicted conditions as ‘appalling’. I know I was out there and it really was grim. When we have to pack up because there are 4 foot waves barrelling down the lake it can get a bit serious and no fish is worth drowning for!

When it has calmed down a bit we’ve had a few nice fish and it’s been great to catch up with some of my regular spring pike anglers. No real monsters yet although I’m sure that will happen, but the fish we have caught have been superbly marked fish up to mid double figures. The one below was one a five pike session for Kevin Appleyard and his mate Matt Barker-Platt. Both are good anglers who braved it out in some hard weather and it was worth it in the end. Kevin is determined to get a Lake District twenty pounder and I can’t wait to see the smile when it happens.

Meanwhile, the weather is forecast to improve towards the end of this next week so we should see the bigger pike start showing up. All we need is faith and a taste of gentle spring conditions instead of yet another wintery spring.

We do have some frog spawn in the pond and the birds are singing their territories so some parts of nature thinks its coming, but I’m not hanging up the industrial thermals just yet. 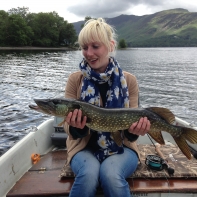 Phil with a nice summer fish 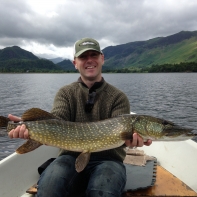 And Tom gets a cracker 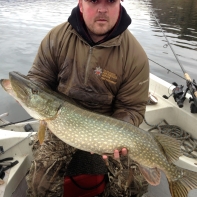