For far too many years now I have been afflicted with yet another seasonal distraction that somehow takes over and dominates my thinking for a few weeks. In spite of mustering as much common sense as I can, and all the realistic arguments against the affliction I still get weirdly excited about the possiblity of salmon fishing. Mostly, I enjoy the physicality of spey casting on a wild river with a big fly rod, which is a good thing as we do far more casting than actually catching of salmon. But then very occasionally miracles do happen and as the fly swings across the river for the umpteenth time, it stops, and then the line tightens as an unseen something pulls away on the other end. And in that moment as the fish and angler register a change in circumstances, life takes on a whole new meaning.

As a professional guide I get as much enjoyment from other anglers catching fish as I do myself, and this week I have met two cracking salmon on the Derwent system. The first was down on a mid river beat with Robert Lattimer aka the Whitburn Wonder, who has been learning to salmon fish for a couple of years now. Last time he got his first one on the fly – a very welcome hen fish, then after a years lay off we went down the river on Monday and in spite of seeing nothing move at all he latched into an angry cock salmon that gave us a right old run around. With several high twisting leaps and long runs across the river it was a proper fight and we were delighted when we eventually coaxed it into the landing net. Not the proverbial bar of silver that we used to catch in the Autumn but a big male fish in full spawning colours. Viewed against the backdrop of the river in the october sunshine it looked magnificent and made for two very happy men as we slid it back undamaged into the river. Next day saw us over on the Eden amidst stunning scenery and a with few running fish showing we fished hard and unsucessfully, but sometimes in places as beautiful as Eden Lacy on a bright October day the fishing is just sufficient in itself.

Two days later we had eight inches of rain overnight and all the local rivers and lakes rose dramatically. Derwentwater was over the jetties and I had to wear chest waders to reach the boat! I had an another Australian client booked in for two days – one of which we lost due to bad weather (I do not compromise where safety is concerned!). Next morning in spite of extremely high lake levels we set out in search of Pike, which Tim had never caught. Now Pike are notorious for switching off for a few days when the lake rises, so with four feet of extra water filling the fields, expectations were fairly low. Undaunted we fished as hard as two good anglers can, and by mid afternoon had one very slim pike to my rod and one micro pike that dropped off at the boat. To break up the day we had a look up the river, struggling to find the main river channel as all the surrounding land was well under water. Arriving in a favoured spot we drifted against the sunken sedges and I lobbed out a small copper spoon with the idea there might be a possibility of either a big lake trout or a pike somewhere on the edge of the gravels a way back downstream. Second cast and a slow retreive through eight feet of water, the spoon stopped and jagged twice and something large moved powerfully out at speed away from the sedges and the rod hooped over as the boat drifted downstream. With no option but to move the boat out of danger, Tim took over the rod and together we fought both flooded river, foul weather and fish.After a while, It showed briefly behind the boat, promoting a gasp of astonishment as a great dark salmon lunged past and I headed the vessel up to where eventually, we could anchor on the edge of the hidden river channel. Time slows when you are so close to meeting very big fish but it took at least twenty minutes before I could hand tail the creature and heave it gently aboard. With the desire to get the fish back in the water as fast as possible we took a few hurried pictures and returned the salmon to the river.

I have no idea of the weight but it was a very big salmon and while not perhaps the fish of a lifetime, it was most certainly the fish of a long time. And as a memorable bit of fishing, it was as good as it gets. At times like that the world disappears into a bubble of being, and it is wonderful….A real Angling Adventure.

Roll on the next one! 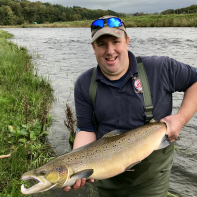 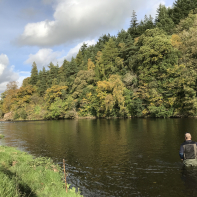 Eden Lacy- What a place to be fishing 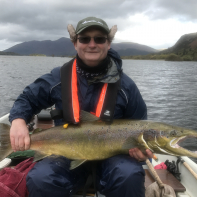