As a busy professional guide and instructor It is not often that I get chance to fish for myself. Yes, I sneak an occasional cast or two but it gets embarrassing when the guide gets the only biggies of the day while my clients struggle, and its not good for business either, so I kind of separate the two things into working (nice), and fishing for me (even nicer). However, for some time now I have been promising myself a couple of warm weather lure fishing sessions on one of our bigger local lakes and one day last week took up the offer of a day afloat in Dale Mordlocks’ boat. As one of my Loch Awe crew, and with plenty of Windermere days under our belts, Dale and I have fished together for a while and have that easy get-along relationship that makes for succesful boat partners. With the forecast for an overcast June day with a gentle warm south westerly breeze I was really looking forwards to it, and even long sufferring Mrs H commented on the level of excitement brewing as I fiddled with traces, lures and wires in the kitchen the evening before.

A reasonably early start saw us exploring new areas way down south and by early mid morning we had settled into the pattern of the day. Drifting nicely round the edges of the plateau areas and targetting those places where new fronds of crispy pond weed reach up to the surface from ten or fifteen feet we felt confident that we’d meet a few pike. There was an air of expectation and that fishy feeling that experienced anglers recognise when it just might be ‘one of those days’. We had a couple of smallish fish to seven pounds or so and a bonus good perch on small jerk baits in an area where the roach had spawned a few weeks back, but nothing special when a move down the lake saw us drifting acros a place with a good ambush ledge down in 20 feet of water. After a couple of knocks and two follows from bigger pike, Dale had a solid hit off a really hard fighting mid double figure fish that pulled the scales to fifteen pounds four ounces. A cracking lean summer pike that pulled like big fish are supposed to. A few more fish to low doubles followed and it seemed each new place we fished had a pike eager to have a go, then as the cloud rolled in and the sky clouded over we found an area where a rocky danger area pushed out into a gentle slope falling away steadily to the depths.

A little to one side was a twenty foot hole and first drift produced a fish of around twelve pounds, this was followed by a jack, then Dale spotted much bigger fish follow his lure and turn away deep at the boat. Optimistic we fished on and I realised I was getting most of my hits when the lure ( a slow sinking 7inch jerk bait) was dropping slowly through the water rather than when I was moving it. So each cast I would count it down to about eight feet, then twitch and retrieve very slowly with long waits to drop the lure down to the pike waiting in around fifteen feet. All the time, keeping close contact with the lure as it sank and tapping gently with the rod top. Takes were solid ‘come here baby!’ sort of hits and for while each cast was fished out with tense expectation.

When you find a gathering of fish in spots like this I have always found it a good idea to give it more than one drift and over about an hour we had several fish out of this one hole including an absolute beast that engulfed the lure and fought like a demon. One of the best fights I have had with a fish in ages and more evidence that these better big water pike are not for the inexperienced angler. This one pulled the rod way down and had the boat all over the place till we got the net under her. On the scales she went 22.5 and my best lure caught fish of the year.

By the time we packed up we ended the session with 18 pike and a perch including five doubles, the fifteen and the twenty two. But now for the strange bit, because even though at times we were fishing the same lure pattern and sharing technique tips , the final score on the door was Eric 17 pike and Dale 1. I have had this happen to me in the past and it makes for thought provoking stuff. It is not just luck but something else was going on. .I realised later what I think was happening.

Not only had I fished the lures deeper on the retrieve but the action of the rod I was using meant that when I tapped gently the lure didn’t jerk forwards but twitched as it sank like a dying fish having one last spasm. And that was the trigger. Dale’s rod was softer in the tip and (I think) pulled the lure instead of twitching as it dropped through the water. And on that particular day something so subtle made all the difference.

Being a good egg there was no animosity from Dale in the boat as we motored home, but it does make for interesting thinking when something so subtle has such a huge effect on outcomes. Next time it will probably be the other way round…hey ho! 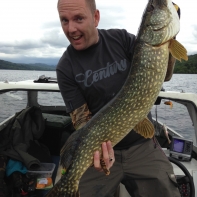 Tintin gets a biggie 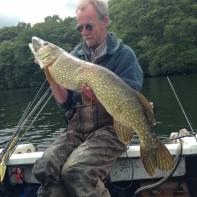 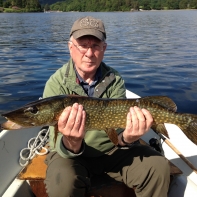 Meanwhile on Derwentwater John Toole with a nice one