Actually the title should read “Pike are just down the road”, because at the moment the Beagle is sitting on her trailer, waiting patiently in the boat shed for another week to pass until we are back down on Windermere for the annual battle against wind and weather, in search of the great specimen pike that inhabit the lake. It has been a chilly old winter so far up here in the Lake District, and in spite of what the weather men call ‘an average winter’, I will be glad when the mid day sunshine gives a little more warmth than the rest of the day takes back. Till then though we will endure a few more of those buffeting bone chilling days that February can sometimes bring. At the moment the fells are plastered with snow and there is more forecast for tomorrow but being an angler of old habits ( I have little choice these days!) I am really looking forward to being back out on the Windermere pike grounds. As always it will be a search for better specimens but knowing the lake as I do I’m sure a few of my hardy anglers will strike it lucky.

For a good number of seasons now I have kept a record of the spring and autumn pike catches on Windermere, where I jot down in my police style notebook the dates, times, weights, places and baits leading to significant catches and looking back, these make for interesting reading. Some baits it would seem are definately better than others or perhaps I just have more faith in them so I catch more pike on them. Most importantly though, I find when reading through back issues of these notebooks that some areas produce consitently at certain times of the day. Now this might be because I happen to be there or there is a definate pattern but I know at least two areas where nothing seems to feed until 3.00 in the afternoon when you can almost expect a run. I have sat there all day on occasion to prove to myself that the pike will feed in such places at other times but mostly it is three o clock in the afternoon when we get the first run!

With a few other places to head for at certain times, my days on Windermere in sprng are loosely guided by the clock which is why you will rarely see the Beagle fishing say White Cross Bay in the afternoon because for me this area seems hard work in the afternoon. Mind you having said that someone will probably meet a thirty five pound pike off there at half past three next wednesday afternoon just to prove me wrong!. And well done that angler if you do.

So I’m off to sort the boat in readiness for next week. I have already used some of the winter days to check and service rods and reels, twizzle up new traces and fill the bait freezer. All we need now are a few gentle south westerly breeze days where the spring sun shines warmly down on the tea drinkers waiting patiently for another run, as another monster from the deep picks up one of the baits and the float twitches, stands upright, then slides steadily away under the surface….

And then I woke up to find the wind howling and the sleet battering my window!

Ahh well, it is February, 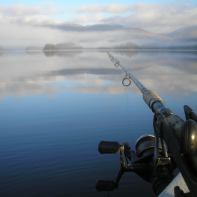 And then the float slides away! 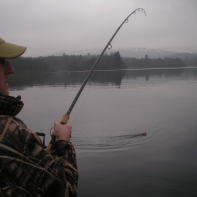 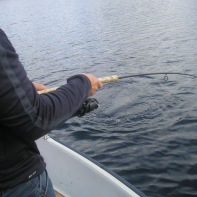