Yes we are really having a proper old fashioned summer here in what was once the Lake District. It might be better called the Puddle District these days as all the rivers are at rock bottom, the lakes are bathtub warm (23.4F surface temperature yesterday on Derwentwater) and until today we have had litlle else but weeks of cloudless skies and hot, hot sunshine. Now while this is great for all our visitors to this magnificent corner of our planet and marvelous if you enjoy the hot weather and loafing around, it makes life as a fisherman a little difficult to say the least. Out on the lakes the pike have just about switched off feeding, perch are tricky to find and in the main fish retire to the deeps during the day to avoid the bright light and with rivers having little or no flow the trout are exceedingly wary.

Things are not all doom and gloom though as the low water gives us chance to spot fish clearly visible in the low clear pools and it is re-assuring to know there a few extremely big fish lurking in places we might have previously overlooked on our wanderings down the river. Several pools on both the Greta and the Middle Derwent have some real lunker trout which although reluctant to feed give are a real delight to watch as they cruise from beneath their sheltering trees . One fish which is easily spotted from a local bridge is well over six pounds and a real trophy specimen fish. I haven’t had a try for this one as sometimes it is better just to know these creatures exist without proving I can catch or fool these magnificent fish. I don’t need to reduce such fish to a photo and a set of statistics. Someone else will no doubt do that.

Mind you on the days when it has clouded over there are some fine perch out there and sometimes the statistics are important. I was out with my old mate Andy mac and ‘that girl’ Ellie Becket yesterday and we had a superb days fishing with well over a hundred excellent fish including three which weighed over 3lbs with the best perhaps nudging four pounds. We also lost a couple of lumps as well to make for a brilliant days fishing. Intrestingly two of the perch had been feeding on brook lamprey, coughing them up in the landing net. Being true re-cyclers we used one of the lamprey to catch one of the fish in the pictures below!

So even though the weather this summer has been old fashioned (Were summers really always hot when we were kids?), there are good fish if you know where to look for them. Meanwhile I’m off trout fishing in Argyll for a few days. Apparently the weather up there is overcast and damp- just right for a few wild brownies to be feeding. No doubt the midges will be feeding as well but then there is always a balance in life.

Take care, enjoy the summer and comiserations to the football fans as apparently it is not coming home after all.

But at least we have a good team and a great manager.

Meanwhile, I’m off to iron my waistcoat! 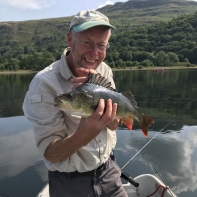 Lake District Fishing Guide on a fun day with friends

Andy with a 3.1 while Ellie is not impressed 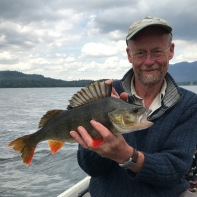 And I nobble one on a recycled lamprey