In spite of what is hopefully a temporary return to cooler windy conditions, the summer has been a good one and the legendary Lake District Perch are making the most of the annual boost to their feeding as huge shoals of this years fry drift round patches of emergent weed. Perch are well aware of the locations of these larder areas and visit them regularly. As usual, the trundle rig has been accounting for some fabulous specimens and on the best days we have had some mammoth bags of very fine fish indeed with lots of perch over two pounds and several close enough to three to offer some real heart stopping moments.

Whilst many of the long hot summer days are spent fishing with dads and lads or increasingly these days Grandads, some of the best specimens have been bagged by my regular clients happy to have a fun sesion or two away from the serious business of big pike hunting that will kick in again as the days grow shorter. And what fine fish we have met. Perhaps the most memorable of an amazing lot of fine specimens, were the pair of twos in the picture below caught by Richard Woodhouse and Kevin Appleyard from a place on Derwentwater where we had sneaked in very quietly so as not to spook the perch which sometimes investigate this area. We lost a huge fish that came unstuck after a real bristling battle, had a smallish pound and a half fish then we crept towards the other side of the small bay when Richard spotted three big perch some ten feet down and away from the boat in gin clear water.

As many of my clients have heard me say “Stealth is everything”, so we cast very quietly and both anglers dropped a trundle rig a short spook free distance behind the fish. The biggest drifted slowly away but the other two came towards the Worm to investigate, and we watched the whole event unfold as both baits were taken.

After a typical big perch fight with long runs and that fabulous bulldog head shaking, the fish were brought to the net and we just sat and admired the stunning colours reflecting in the afternoon sunlight. Marvelous. That day we had somewhere near a hundred fish with a great spell for over an hour of every fish approaching two pounds and this is on Derwentwater – a lake which is really coming into its own as a fishery these days. The roach population is blooming and we had a day of twenty five pound plus roach last week from a deepwater mark. I also heard of a picture posted on a web site of a two pound Rudd caught by a young angler off the Keswick landing stages one evening a few weeks back so there is a real sense of optimism about the place at the moment.

Summer fishing and Pike are most definately not the only fish!

Oh yes, and to add to the excitement we have a few salmon around as well. There have been quite a few fish caught on the Derwent below Bass Lake in the past week with several beats reporting multi fish days. I’ve not had one yet but saw a very big twenty pound plus salmon clear the water down on the Cauldron last Thursday. The proverbial bar of silver, it wisely ignored my offerrings and carried on upriver but at least it gives a bit of hope for the future.

So a few more weeks of the perch fishing, then its salmon fever for a while before the Autumn pike on Windermere which are waiting just around the corner. I’ll have to call and see Mr Morrison for the baits order very shortly…hey ho. 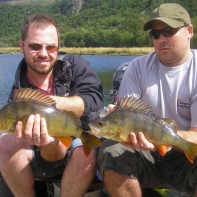 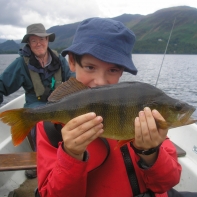 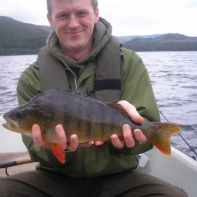 James and another good ‘un