Well you know how it is …there are times when you simply have to go and try something different, and even though I live, work and fish in stunning surroundings with plenty of fish of all sorts, sometimes the old adventurer in me needs to be challenged. My mate Bob and I have been plotting a trip for a while and hence we recently flew out to the wilds of British Columbia to spend a week in the land of eagles and bears in search of steelhead, those legendary sea run rainbow trout of the pacific seaboard.

There are reasons stuff becomes legendary, and with steelhead and salmon it has something to do with being tough fighters, difficult to catch, or both. We fished the Skeena river up at Terrace, choosing what we thought was to be the best time to be in with a chance of plenty of salmon and those legendary trout. Wihout going on about it too much,in my case they are still legendary. True we had plenty of chum salmon to well over 20lb, lots of pinks and a couple of Sockeye including a day of fifteen fish and yes Bob nobbled a steelhead, but when the thermometer reaches 30 degrees causing snow melt to fill and colour the river, then the fishing inevitably turns hard. So although we have been and seen, we haven’t quite conquered and there is still a sense of unfinished business. Oh dear we might have to do it again!

On the back of the salmon and steelhead fishing and to make the most of our time out there, we added a couple of days fishing for white sturgeon on the legendary Fraser River a few miles upriver from Vancouver. These fish are big, very big and when hooked they run a long way and then leap. For a man well used to sitting in a boat watching a rod tip this seemed a dream set up. Fast boat, wild country, bait rods and fish. First day we had three with Bob losing a big one when it snagged a sunken tree and boy do these fish fight. We had a couple that took us way down river in epic battles of memorable proportions but on the last drop of the last day, we settled into the tail of an eddy where I had spotted a few sturgeon rolling. With a lask of salmon anchored behind the boat there was the smallest of nods on the rod top. Lifting in, I was confronted with a sense of something very big powering unstoppably downriver. And then it jumped.

It is not every day you see fish nine feet long leaping clear of the water, and it is even more unusual to have on the end of your line something so mind boggling huge that it makes you shake with wonderment. But these creatures do exist. Well over an hour later we beached the fish in the shadow of a native fish drying rack,and wrestled the sturgeon into a photograph. At 370 lbs it was no easy task but what a finish!

Two days later, back home, jet lagged and knackered I was out perch fishing with kids on Derwentwater! 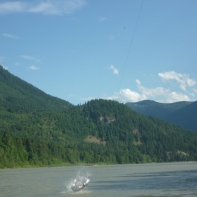 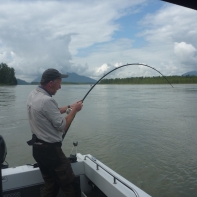 A proper bend in the rod 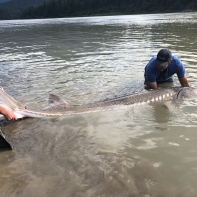