For the past few months it would seem that there has been little else on this site other than pictures of perch, smiling children with perch and epic tales of great battles with specimen perch. So much so that I have actually had a couple of folk getting touch and complaining there are too many stories of…

So bearing all this in mind here’s a few more pictures and tales of perch!!! and there is also a sort of explanation..

Over this summer we have had some fairly exceptional weather and for once it has felt like a proper old sort of summer with high temperatures, blue skies and very warm water temperatures. This has meant that chasing pike has been a risky business as they don’t always go back in the best of condition often struggling to recover from the exertion of the fight, and even though they do sometimes offer good sport I refuse to compromise the future fishing by over doing it on the pike front. ( Take note those of you who fish for pike in hot weather regardless of their future welfare!). While down the river, water levels have shrunk to nothing and trout have fought hard to survive without we anglers adding to their troubles. Which is why with perch having moved into shallowish water and providing some cracking fun sessions they have been number one target. Hence this months shoal of even more tales of spectacular perching sessions of over a hundred fish to over three pounds including lots of ye olde personal bests. Lawrence Greasley and his postie pal Mike had perhaps one of the best when we shared a day with only a small number of small ones and more two pounders than I have seen in ages including around half a dozen over three pounds. Just great fishing, brilliant craic and lots of fun. Now for most folk, these specimens are the fish of a lifetime and it is sometimes easy to forget how special these are. Which is why careful unhooking is always required but I have noticed this year, that with more anglers apparently targetting perch, I’m seeing a few fish that are showing signs of angling pressure with torn mouths and weary fins. I suspect the increase in numbers of fishermen out there drop shotting might have something to do with it, so please flatten those barbs if you are out drop shotting and remember…

These are the days when someone in the future will look back and say…”Aye…those were the days” .

So respect and treasure what we have and don’t bugger it up for the next generation!.

Which leads nicely onto the other week, when my daughter Heather brought our Oliver and Maisie out for a short session. With two perch over three pounds as well as lots of other good ones she insisted on having not one but five last casts, followed by several more last casts, and then some more …Like father like daughter.. and the grandkids just loved it as well.

I had forgotten what a good angler she is. Nice thing to do though…go fishing with the family!

But with the recent onset of colder weather the perch have moved into deeper water, so I shall leave them alone till next year. They are still catchable but do not survive being lifted from deep water and are best left to their own devices. So all of you out there who have been muttering about too many perch stories, your wish is granted. And for a while at least..this is the last one. Unless of course I nobble a late four pounder from Grasmere!!!

Besides which …here comes the Windermere piking season..and the usual autumnal obsession…yippee! 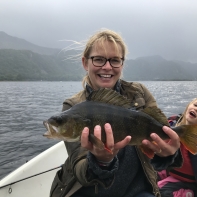 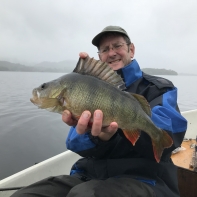 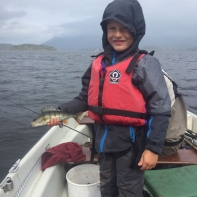