There is always a sense of great anticipation whenever I set out to go pike fishing on Windermere. Regardless of what other anglers might be thinking as to how the lake is fishing, it is a water which does hold some fabulous fish and as with the good old national Lottery you have to be in it, or in my case on it, to get a result . Even so there are times when it can be a dangerous beast of a lake when the weather is against us with strong winds buffetting the boat and foul weather making presenting a dead bait difficult, and that is assuming the anchors hold in a four foot swell. But then suddenly after an age of waiting, usually in a quiet corner sheltered from the wind, the float twitches or the baitrunner clicks in that dynamic way to say something unseen a long way down has picked up, or is investigating our offering.

We had one today on the second rod out, where a flat calm showed every lift on a slim float. We all watched it duck. stop.Dip again then ever so slowly the float slid away into the reflection.. And for that moment alone, all the hours and sometimes days of waiting are worthwhile, and I love it!

We have had a few of those moments over the last couple of weeks but it has mostly been slow going. Depression after depression has brought awful weather which coupled with a few serious slate rattling gales has made life and fishing very difficult. Ever the optimist though, I continue to explore and find new productive areas which somehow produce a few fish. Not shed loads but just enough to keep the enthusiasm going. Out with Dale Mordlock the other week we were in philosophical mood as we set forth in his boat to sort the sonar and set the boat right for future sessions. We’d had two hard days up the north end with only a 12lb fish to show for our efforts but launching at Ferry Nab gave some shelter from the forecasted windy afternoon, and along with a few other distant boats we explored a few sheltered spots around the Storrs area. Two brightly coloured anglers in an open boat were sitting off a favourite channel between one of the small sunken islands known as ‘Oven bottom’ and a local regular was nestled on a shelf in the lee of an island, so we explored the far side towards the river mouth. All quiet on the sonar and somehow, it just did not feel right., so acting on a deep instinct that I cannot really explain, we crossed the lake to a little place I know on the east side where a sunken fan of rock cuts outwards from twenty feet towards deeper water, and the shelf drops away gently into fifty feet and the great unknown..

The usual series of invitations to dine were sent out to a range of depth bands along the hidden shelf and we put the kettle on, sat back, and began the familiar waiting game while the weather filled in again darkly from the south east. After some fifteen minutes or so there was a sharp call from the baitrunner on one of the thirty foot contour rods and Dale wound down to the fish as I cleared the decks on that side in readiness. This fish was one of those true battling biggies and after a real hard ten minute fight of epic proprtions, we netted our second twenty pounder in six days.

Now this all sounds like very good fishing but you have to remember the hours of waiting and more than a couple of blank days we put in to get these fish. We hold long rambling conversations and drink gallons of tea, and in spite of what I hear from other anglers about how badly Windermere fishing has become, there are still some fine fish to be had, but it is not a place to go for lots of runs. A few years back it was different and six in a day was a fairly regular occurrance, but times change and waters run in cycles. Perhaps at the moment the big pond is going through a slow patch or maybe I’m missing something, but hopefully things will improve. For me though, as long as that float still slides away every now and then in a place as beautiful as Windermere it’s enough to keep me going out there.

I have missed out the bits about the roe deer stag swimming across Pull Wyke, The otters very tame ..shoud we feed them?, and the journey back from Bowness to Waterhead with a dark storm coming in fast from behind, late on a wild day. We surfed the waves down the winter lake in a foor foot following swell and raced the storm to safety. ‘Eric in his natural habitat!.’.. it’s a great place to be.. but you do have to be carefull. I also failed to mention a day of eight chances, loads of wildlife moments and some fabuliously memorable times afloat so that will have to wait for another time.

Meanwhile …according to the met office, it’s calming down. again..and I’m going pike fishing in the morning… 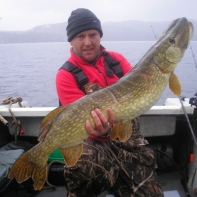 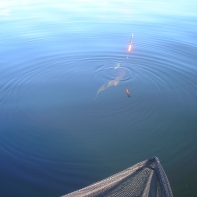 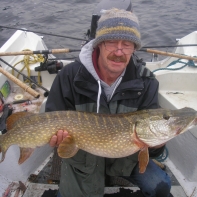 Tiny with a good double