Sue and I were over in Norway last week staying with Matt and Anna- Marit Hayes at their excellent Winsnes fishing lodge on the famous river Guala. www.Gualafishing.com As I’ve come to expect from the lad, Matt has been busy since our last visit, converting the barn into a pub and cafe and installing a well equipped fishing store as well as gathering a great team of guides and staff. From a fishing point of view though we couldn’t have timed it worse as we arrived in the middle of the hottest period for 50 years and the thermometer was reading 34 degrees most afternoons.

No real surprises then that the salmon fishing was difficult as the Guala dropped rapidly to bare bones but it was great to be back fishing on this once legendary salmon river and I fished as well as I know how, but there was no answering pull to lift into. With water temperatures approaching 20 degrees the salmon were in danger of being lightly poached so in the company of Matts father in law Jakob, and the rest of the family, we tried other things.

Like the best sour cream in the area, with some of Jakobs cousins on the terrace at their high mountain cabin, as the kids played quietly beneath huge sky sunshine and we sat drinking coffee and the scenery, talking with friendly locals who came by to chat as the bells from cattle echoed across the dale.

Or the mountain stream where we swam in water so clear you can watch trout scatter to the cover of boulders twenty feet down .

With the salmon fishing being hard it seemed a wise move to try fishing the higher lakes so we loaded up with kayaks and headed out towards the old mining town of Roros. Even at a few thousand feet high, the lake was still bathtub warm and with hardly any ripple disturbing the surface we knew it would be tough. But we fished on anyway, paddling several miles with snow streaking the fellsides in the distance. I rose (and missed) a good fish on a Half Arse and that was about it. Undaunted, we fished through the half light to well after midnight but nothing came to the flies. An odd rise in the distance would fade as the boat approached across the flat calm so the next night we tried another lake even higher and further away in search of Char on a dry sedge…and the result was the same, but the surroundings were simply fabulous.

So even really good anglers ( and me) have a hard time of it on occasion. But it was a great trip, thoroughly enjoyable and, because the fishing was out of sorts we had opportunity to touch Norway in a different way. As is often the case when original plans have to be changed, with the right attitude, the outcome is often better as a result.

Meanwhile, back in the Lake District the same high pressure system had slowed down our own fishing and though it is raining hard at the time of writing , the lakes and rivers have also been at rock bottom. The perch have been active though and we have had several two pound fish over recent days as part of hundred fish catches. With this rainfall lashing down though I’m hoping to get a summer salmon off one of the local waters and the trout fishing should be worth while as well. And as for the perch fishing ..once this rainfall lifts the levels and settles, there will be some big fish to be had… 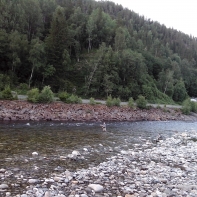 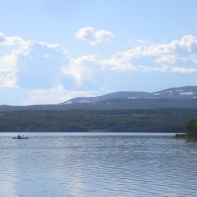 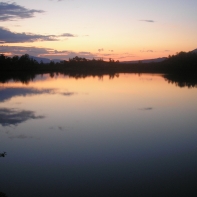 Midnight over the Charr lake