Eagle eyed readers who also spend time watching telly instead of doing something useful might have spotted the two rogues in the main picture. It’s on the trailer for the new Mortimer and Whitehouse Gone Fishing series, about to start on BBC2.  The bad news is that the episode where they are in the Lake District involves yours truly!! They were up after the first lockdown and I was invited to help. We spent a few days filming on Derwentwater then went up to Watendlath fishing for trout, and a lot of fun was had by all. Very wisely, any bits that I am involved with will probably be left on the cutting room floor but it will be interesting to see the final film which is on BBC2 at 8.00 on Sunday 12  September. 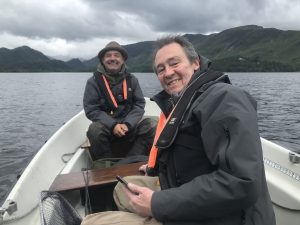 Mortimer and Whitehouse in the Doghouse

I am sworn to secrecy as to the outcome but suffice it to say it is difficult to catch fish when the lake is five feet up after overnight rain and we have an enormous safety boat alongside with the crew onboard. However,….. you’ll have to watch and see!

Meanwhile, we have been unbelievably busy with visting anglers and would be fishermen and women. The Goverment advice about the outdoors and  ‘in nature’ being good for our mental health has led to lots of folks wanting to go fishing so we have been inundated with enquiries. I have doubts about government advice especially regarding mental health, after all I have been fishing for years and the end result is worrying!  However, this last week has been grandchildren week and we have been perch fishing with jigs (the lures not the dance!) as well as trundling worms. The fishing has been great with so many bristling  perch being caught I have nightmares about hearing “Grandad, I’ve got another one!” and under the bandages my hands look like I have spent a week juggling hedgehogs.

“Grandad, I really like fishing, it is so de- stressing. I get wound up with football, but this is different. I can chill”.. Nice one Oliver. 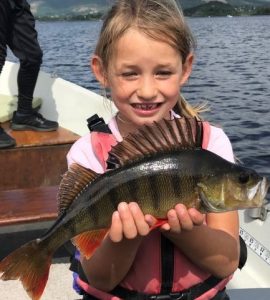 Maisie gets a big perch 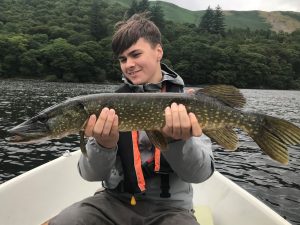 Harrison gets one on a jig and 5lb line!

So thats it for the time being. The only other news is that at long last I have a book coming out later in the year, to be published by Medlar Press.

‘Tales of a Lakeland Angler‘ should be available from Amazon and Medlar Press and although not yet a Sunday Times bestseller..who knows!

It’s not a book of how to do it but there is some of that in there, it’s more  a selection of bedtime reading for anglers and lovers of wild places. I’ll let you know when it’s out.

Till then though stay safe and well and I’ ll catch you all later.