One of my regular blog readers ( yes, there are more than one!) e -mailed after the last post on this web site to check I was OK, because the blog hinted at hard days and a slightly depressed Eric. Now as a man who generally tends to look on the positive side of things, I re-assured Mr Mc George that all was well, but admitted that although the fishing had been a little tough over the summer I was sure it would all pick up given a little settled weather and time. So…

The other day I was out with Russell Haynes and son Will who had dragged himself out of bed in the time honoured way of an older teenager faced with either a wet flannel in the morning, or the other good incentive of the possibility of a good days fishing in the Lake District. Normally at this time of year once we get out on the lake and have decided on a loose plan of action over a few early feeding predators, it’s a case of heading straight to one of the best and most likely looking drop offs where several deep water features meet the shallow water and go hunting big perch, for which the Lake District, and especially the more northern lakes are justifiably famous. On this occasion though we did something a little different and instead, following a hunch, we took the road less travelled.

As so often happens when this occurs, just as in the Robert Frost poem, the resulting journey is so much the better, and this day proved to be yet another example of this curious occurrence. After years of wondering why this happens I have given up trying to figure it out and just sort of accept that as an angler we use some of our brains in a way which is different to mere mortals, and as I advise all my salmon fishermen, and increasingly others as well, if you have a feeling that something or somewhere is worth trying, do not question it but follow your instincts and just do it.

Hence at half past ten we were trolling up the lake with a couple of new lures fishing a long long way behind the boat, poised and waiting for something to happen. Will had the first one ten minutes in, a feisty pike that grabbed on the pause after a pull back on the rod. It came off at the side of the boat but we didn’t really mind as there was a definite feeling of optimism due to a real fishy feel to the day, and we moved across towards a shelf on the edge of fifty feet.

Not long after this Russell had a real bang on a shad lure we were trying and seconds later the rod hooped over. Way back in the distance a big fish rolled and we saw the square tail as it cleared the water. As I eased back on the throttle and Will retrieved his lure out of harms way, Russell played the fish like a hero and after a real epic battle we slid the net over an absolutely stunning Lake District brown trout.

Weight is immaterial when you meet such fish but as the picture below testifies, it was a superb creature that swam away strongly, and when the rest of the day was followed by over sixty perch to just under three pounds, some fabulous specimen roach, we didn’t mind when the weather came back in to call an early end to the session.

As Andy Mac Donald often tells me when the weather is foul and the forecast worse, there are some days when he doesn’t envy me at all…but then there are the other days…

and this was one of them.

Oh Yes ….And I had another of those carp things on a dry fly last week….and there’s a great picture of the Doghouse on Matt Hayes facebook page at the moment.. 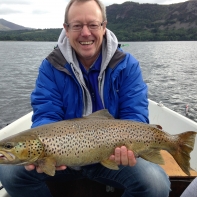 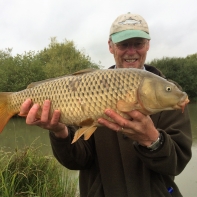 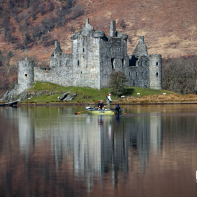 Loch Awe. Eric and Tiny in the Doghouse