We have been travelling up to the wilds of Loch Awe for several seasons now and as always it is an opportunity for a real adventure, and this years trip was no exception. Travelling up on the Saturday we experienced what Carol the tv weather woman referred to as ’ an arctic Polar plume’ and were greeted by an eighteen degree drop in temperature by the time we reached the shores of Awe – lovely, get the thermals out again.

Having said that we did remarkably well considering the stuff the weather threw at us. Most days we had everything from hail, snow, rain, gales and scorching sunshine often in just a few minutes!. One day we were sitting out in the shelter of a promentary way down the loch when we heard a roaring noise coming our way. As we watched the loch transformed from flat calm and benign, to a malestrom of white as a wall of snow and hail blew down the loch on savagely cold, gale force winds. Within minutes we were sitting in astonishment looking at three inches of the white stuff in the boat!

The things we do for fish.

Overall though the scores on the doors tell their own story, for in spite of talking with several gloomy anglers coming in after hard days fishing with little success, we ended up with 56 pike to just over 17lbs which in view of the conditions was not bad going really. Admittedly some of these came from our back up water but with the best Awe fish going 17.00lb and it having pulled the Beagle round on its anchor twice gave us more than a few minutes of heart stoppping entertainment.

Best of the week came to Andy Mac who nabbed real hard fighting 17,6 off the bank but Stuart Watts of PAC fame had a number of hard fighting battlers to mid double figures and plenty of scrappy action with the ever eager jacks. Sadly, Dale and Phil had to make do with plenty of action but nothing particularly huge. While yours truly lost what would have almost certainly been the biggest of the week when it just came off. I do not get too upset when I lose a big fish -it’s one of those things that happens occasionally but this was different. A slow steady pick up and when I lifted the rod (a stepped up Greys 3.75 tc) it hooped over and was pulled steadily downward as the clutch reluctantly gave line. Now I am fairly well used to big powerful fish but this was different. As the line sang, the fish kited away deeply and powerfully heading steadily to my left some seventy yards away. There was nothing I could do except keep calm,give a little line and wait for the fish to slow down. Somewhere way out the pike turned to the right and ten yards further on simply came unstuck… As always I waited to see if the bait was re taken, but nothing. When I reeled the sardine in the bait was a mess, and I wasn’t much better. But sometimes it is the ones that get away that stay in the memory long after photos have faded and this one will stay with me for ever.

I have said this would probably be my last visit up there but now I’m not so sure …after all it is a great adventure and there are some fabulous fish to be had if the weather allows, so next time will be a little later in the year and then we’ll see.

Meanwhile closer to home I have been trouting. Some real big specimens have been coming off the Eden in recent days and with over 20 spring salmon this last week alone, I’m looking forward to a couple of days fishing for Springers with a bit of mid day catching of trout in the bargain.

And it’s forecast to get warmer! 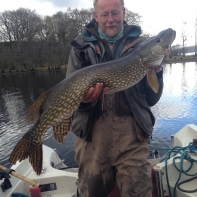 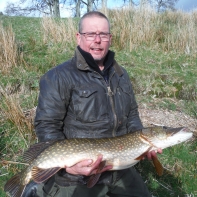 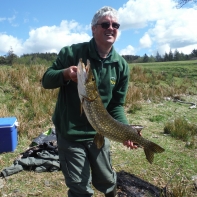 Stuart Watts and a bendy pike