The title says it all really as the days now grow shorter than the nights there is a chill in the air and winter lurks in the wings of the failing summer. With only a few days left of this years brown trout season there is a real urge to have a final shot at some of the bigger fish that travel up our local rivers, and so I wandered down the upper Derwent the other evening with trout in mind.

A few days before I had been out on a bright day in difficult low water conditions with a client and though the fishing was hard we managed a couple of small trout. Travelling back towards the car the sunshine was lower in the sky and with the exceptional clarity of the river we spotted a pod of half a dozen big fish resting nervously in a four foot glide. Two were around the three pound mark but the others were very big fish somewhere upwards of four or maybe five pounds and I realised we were looking at a pod of sea trout. that night was cold and clear which is never ideal for fooling these difficult fish so I waited till the day after before nipping down for an hour a little before dusk. There had been a few showers high up in the hills and the river was just a couple of inches up on the previous day but not enough I reasoned for the fish to have moved on. Setting up my trusty Guideline seven weight I fished down through the pool above to get the tricky casting polished enough to venture beneath the canopy of willows slightly above the sea trout lie. Swinging one of my black pearl singles across the tail there was a swirl and a nudge then nothing. Muttering about short takes I plopped the fly off the trees on the far side , let it sink a moment then started the twitching swing over the same area. Swing, twitch thump! and the trout erupted into the air. Not a sea trout but after a great hard fight I slid the net under the fish in the first picture. At sixteen inches and very dark it was typical late season brownie and a great start.

Fuelled with optimism I slipped down river to the pool where the real big fish lay in wait. Tricky fishing here under the tunnel of willows, and tight jump roll casts were required as I teetered along in deep water an inch off the top of my waders, but surely , any minute now there will be that solid pull of a sea trout in the dusk.

Fishing as well as I could, it seemed every cast deserved a fish. By the time I reached the tail of the pool, I’d had absolutely nothing apart from a bad dose of seepage over the wader tops!.

For in spite of only the slightest rise in water, they had moved on !

I was kind of philosophical as the moon rose over the fields. Somehow happy and disappointed at the same time. Content with the big brown trout and even more satisfied with the way I had fished through the difficult tunnel of trees. It would have been good to have met one of those very large fish, but sometimes with a fly rod, the fishing is sufficient in itself. And for that I am eternally grateful.

Meanwhile, I’m off to the upper Lune tomorrow for one last cast. 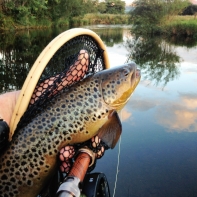 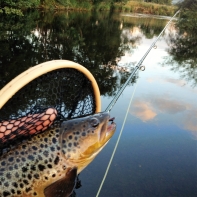 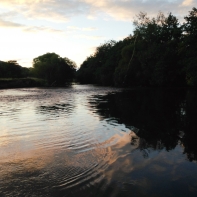 And they had Gone!