When I was a lad growing up in the wilds of north Lancashire, perch were a reliable feature of our fishing. Mostly these were small but very welcome fish with a big one being perhaps ten inches long. Anything bigger was viewed as huge and almost worth phoning Angling Times! These days though as regular readers of this blog are well aware, as an angler living in the Lake District I am privileged to be in reach of some of the best perch fishing in the land, with fish over two pounds showing up as a regular occasion as well as a few real whoppers.. There are lots of fish and a broad range of sizes and this is important, as quite simply, plenty of small ones seems to equate with some very big specimens as well, mostly because as a species Perch are hugely cannibalistic. Forget dog eat dog, out on these bigger lakes and elsewhere I suspect….Perch eat perch. Yes they also eat most other things that come their way: hence last blogs mention of brook lamprey, and while a trundled worm will seek out some crackers we have discovered that the addition of a single yellow maggot to top off a head end hooked worm seems to be especially effective. But the big ones definately show a preference for members of their own kind. Small perch lures and mepps type spinners fished off the bank or boat will generally do the business or you could where it is allowed, try a small dead perch twitched back. In all lakes where pike are present always use a fine wire trace with either spinner or twitched tiddler as pike are hard wired to take small fish over the summer months and bite offs are best avoided for both fish and the anglers well being.

I am often asked by visiting anglers where and how to fish off the bank to be in with a chance of a fish or two so without giving too much away…here we go.

How:– Light spinning rod with 5 or 6 lb mono line ot light braid and small spinners – I like a red bodied silver blade ABU Droppen with a tag of red wool, but blue, spotted and green with a red nail varnished body also do really well. Small rubber jigs and drop shot style lures in orange, yellow or especially green also work well but Let ‘em sink before you retrieve! Better one cast through where the fish are than a dozen eight feet above them.

Erics Trundle rig also works very well but be aware you will be casting out away from the snaggy shelving edge and reeling back in towards the shelf!

Where:- Perch like a bit of disturbance to bring in the fry so round jetties and structure are always good places. Ullswater, Windermere, Coniston and Derwentwater jetties hold some great fish but are best fished when the boats have stopped running for the night. Other places to try are headlands and points where rocks stick out into the lakes, especially where weed beds reach the surface or there is a shallow fry holding bay on one side. Calf close bay and Barrow bay on Derwentwater are typical perch holding areas as are Howtown and Glenridding on Ullswater. River mouths and anywhere a stream enters also hold fish. Best tactics are to search for the perch. All these lakes are best fished by casting not out into the lake but diagonally at 45 degrees from the shore to make sure your spinner is covering the shelving drop off where the perch patrol. Two or three casts then move along a bit. Eventually you will find the fish. I flatten the barbs on all my spinner hooks these days – it does less damage when a perch swallows the lot!

A last but not least don’t forget the small forceps.

Have fun and remember fish don’t have to be big to be fun.

Mind you now we have some water….I’m going salmon fishing1 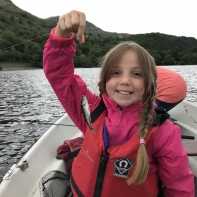 The smile says it all- Matildas first perch 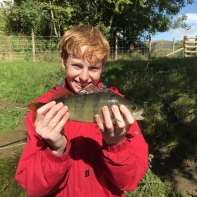 Sight fished on a fly!- nice one 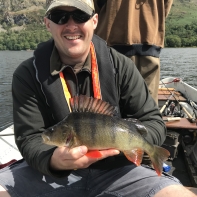 and thats a proper perch