Happy new year to you all and I trust this is the year you meet one of the fish of your dreams. Well at least I hope I do! Mind you, it’s hard going out there at the moment though and the pike fishing on these big waters can be a tricky business in the depths of winter. I had a day out on Windermere in Matty Ropers’ open boat this last weekend during a slight lull in the wintry stuff and we worrked very hard for not a lot of success. One slow possible pick up in the south basin- you know the type…the float dips between waves, fails to come up then re-appears, dips again and sits almost but not quite below the surface. Lift the rod and feel a sort of something way down in thirty five feet. The line is taught but not moving and when eventually you lift to twitch the bait and hopefully trigger a response…there’s nothing. On retrieving the bait there are a series of very small pin prick teeth marks suggesting a miniature monster of the deep has been considering things before deciding food is off the menu. So we moved, fishing several other places where a few bait fish were showing on the sonar but with nothing to show for our efforts.

Eventually we arrive at a favourite place to pick up a late afternoon fish and the weather at last settles down into one of those ‘any minute now’ moods. You know the sort of thing when the wind drops, the surface becomes calm with just a gentle ripple and the chill of the day is replaced by a feeling of ‘hmm this feels fishy’ which is something that is impossible to quantify but as anglers you kind of know when it happens. Unfortunately that morning we had launched at ferry Nab and were dissapointed to be told they close the gates at 4.00pm in winter. Being half an hour away at half past three we brought in the rods, still fishless and as I reached for the last rod the line tightened, so I waited a second then wound down. A steady lift, one kick from an unseen monster, then nothing. Muttering quietly we lifted the anchors and set off back.

AS it turned out it was probably a good thing that we missed the fish as by the time we had sorted the boat on the trailer back at Ferry Nab the wardens were locking up behind us. Two more minutes and we would have been trapped behind the iron gates.So be warned, if you are launching on Windermere be wary of the time as the Wardens behave like men on a serious promise and like time, they wait for no-one.

If you do get stuck and have to overnight in Windermere I have found a nice place to stay though. Blenheim Lodge in Bowness has lake views and as with most of my recommended places they know about anglers and in spite of that are welcoming and friendly.- check out the link on the useful links section of this web site.

Meanwhile, I am looking forward to February when we are back down there in the Beagle, baits out, kettle on and ears and eyes open for that first indication of something stirring a long way beneath…. I have also been working on the Doghouse, the fabled Bassenthwaite perch fishing boat featured in the Anglers mail last year. All the old paintwork has been stripped off, the holes properly filled, a new gel coat applied, and re painted and varnished it looks great and literally as good as new.

Then there’s Loch Awe at the end of April, which always has the taste of real adventure about it and something to keep us optimistic on the dark days when winter seems to clutch and never let go…

But for now there’s snow and frost forecast for the middle of this week so I guess its just a normal topsy turvy winter in the Lake District and I do sometimes wish I was guiding in Florida where the sun shines, the sky is blue and the beers are cold…but when that float twitches on Windermere ….. 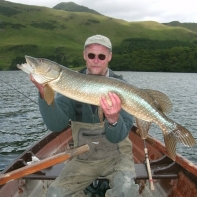 Long and lean..and a nice fish as well 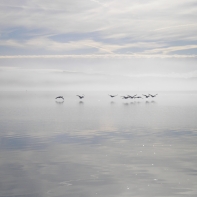 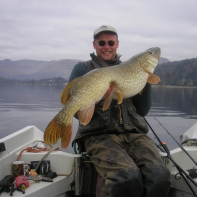