Now before I get harrassed and threatened with serious personal damage for blasphemy by Methodist or C of E Jehadists, this holes in the hands business has nothing whatsoever to do with either religion or personal doubts about being nailed to a cross!. But instead is all about Perch.

In many parts of Britain it seems Autumn is the prime time to hunt the fabulous fighting fish that are big Perch, but here in the Lake District, at least so far as I can make out, there is only one bonanza season for perch and that is late summer. From July onwards most of the bigger lakes up here should be producing some fine specimens and while they might not all pull the scales to the magic three pound mark we do meet up with an awful lot of fine specimen fish. Once you have the location sorted out, provided the weather is gently overcast and prefferably threatening rain, with a little dilligence and subtle fishing you should meet a few good fish. I tend to target either the bigger weed beds or those places where a sunken promentary juts out into deeper (25’+) water. Anchor quietly a little way from the selected mark and introduce a few balls of groundbait mixed with worms, maggots, prawns maybe if you have a few left over from last nights paella, and a squidge of predator plus. Now for the good bit, because to get the really big ones you have to wade through a load of smaller fish. Some of these avearge above a pound and come to the boat with a bristling cavalero sort of look – as I said to someone last week they look as though if they could speak, it would be in an east London accent….

And this is where the holes in the hands bit comes in.

Because when I swing one towards the hand or dive into the net to extract the hook from a big one, the spike on the gill cover almost always get stuck somewhere and it is most often in my hand!! Hence I always have a few tubes of tea tree ointment on board. It takes the pain away and promotes healing and I even use it on the fish sometimes.

By choice for bigger fish I use Erics trundle rig, partly because much of my guiding at this time of year is out with young anglers and it gives them more casting practice as well as developing a real feel for the whole caper, and also because it is usually more effective than the trendy drop shotting technique. Interestingly I am coming to the conclusion that big fish of most sorts want their food provided with very little effort required on their part and many of the really big perch up here fall to a really slow or almost static bait. But as I said earlier, you do have to wade through a lot of smaller stuff before the big old girls decide to investigate , but when they do, you get a real proper fight with that wonderful head shaking battle between some astonishing long runs. As the late great Richard Walker once said,

“Big perch, are the biggest of all fish”

and I couldn’t agree more, I love ‘em and over the next six weeks or so, I expect to meet a good few of them. Meanwhile here’s a few teasers from recent sessions on the lakes. 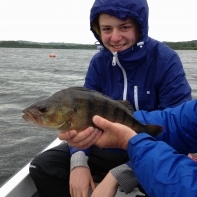 Will Haynes in fear of the perch! 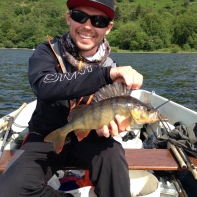 Is this Prof Brian Cox?? 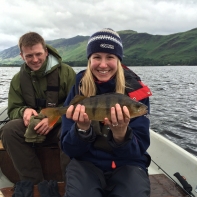 Fay Sheringham shows how its done