Apologies to my regular readers for delivering this up-date a little late this month but I have been busy out on the big pond and most days after fighting gales, wild weather and hauling anchors all I need on my return home is a gentle rub down in a darkened room, so some things have had to slip and this blog is one such victim.- hence this later up-date. Each year I forget just how tough it can be out there and in spite of it being as Cieran Wilson said as we came in early after another battering “utterly brutal.”, I always look forward to the annual sessions down on the big pond with much enthusiasm. Rumour and the forums apparently have it that the fishing is hard at the moment on Windermere, but as my regular clients are aware I don’t allow other anglers notions to have that much influence on my fishing.

Yes it can be grim, yes, it can be very hard going and sometimes more than a bit cold and wild but there are some occasions which for a lifelong angler, offer the finest experiences that pike fishing can offer. And in spite of terrible weather, we have had a few of those special moments recently. But be warned, this is not a heads up that Windermere is fishing its socks off and pike are suddenly easy fish to catch, because it simply does not work like that. Most days are an exercise in stickability, determination, patience and when the snow is falling and hail blowing horizontally, even bravery is needed on occasion.

At the time of writing this on a much needed day off, there is yet another hoolley blowing past the window and with weekend forecasting more of the same I just hope we can get out safely, for in spite of the weather when there is a lull and things calm down a little there are some beautiful pike to be caught. Lesley Corr had one of the first really nice ones but Geoff Hornby and Steve Schroeter each had their first Windermere twenty pound fish recently and both were stunning pike.

As the days are getting longer I have another two weeks down there and if the weather allows I’m looking forward to meeting a few more bigger than average fish. But it is interesting how many re- captures we get. There are some distinctly marked fish out there in the vastness – Steves’ had a tiny underdeveloped fin on its left side – a bit like Nemo in the cartoon of the same name. Caught in November at 19.2 it now weighs in at twenty pounds two ounces and was caught on the same bait a mile and a half away from the scene of its Autumn capture. Another one came back to say hello as well this year but it was only while looking at the pictures did I realise we met last spring and she had put on….Four pounds in a year, so treat your fish with kindness and unhook them with the delicacy of a surgeon. Return them quickly and they might just turn out to grow into the fish of dreams.

I’m doing some filming with Hayes and Brown again next week- Mick is feeling down about the state of pike fishing in the UK at present and Matt is making a biopic about the great man of Pike fishing. Someone is needed to cheer the man up and anyway..they need a tea boy with a boat ! 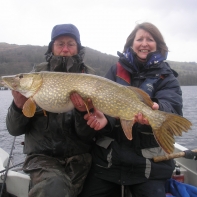 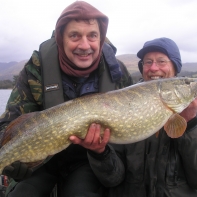 Steve and a dwarf version of Eric 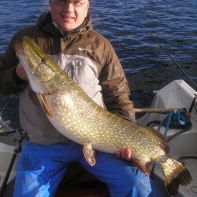