Many years ago I read an article by Dave Steuart in the old and much loved ‘Angling’ magazine concerning the difficulties of winter fishing. I can’t remember much detail about the content though I can guess, but the headline stuck in my mind- ‘February, Yuk! ‘. And although these days I don’t mind February as I’m usually looking forward to the spring pike fishing on Windermere, January is a real sad month for me and I do understand Dave’s sentiments entirely. It might help if I went out fishing but the weather this winter has not so much called the tune as disbanded the orchestra, sold the instruments and lost the players!

If it’s not floods it has been snow and when it melts, each rise in water carries so much suspended silt that in the lower lakes at least, fishing has not been exactly high on my agenda. Never mind there is a vague hint of longer days and with all the mild stuff this week we do have a few snowdrops hinting of better days around the corner.

I don’t mind when there’s lots of snow-These days I get out to play with a couple of the grandkids and have a great old time that has nothing to do with fishing and everything to do with the magic of the white stuff. I wasn’t always like this you know. Not so long back I used to love sitting under a brolly down the Ribble watching snow drifting past the rod end down at Hodder foot or Dinkley, or out in ‘the Doghouse float trolling over the winter grounds on Bassenthwaite. But this winter has just been grim. To cap it all off, the Highways Agency are now stating the A591 which connects me to Windermere might be closed till May!!! (exit Eric stage left muttering ffs under breath). You might have seen on the news that legendary storm Desmond has taken out most of the road over Dunmail raise and dumped a lot of the old Helwellyn mine workings onto the road side of Thirlmere. Hence the closure of this major route which bisects the lake District.

Which is why the Windermere pike will have to wait till June to say hello. I’m having a fortnight lure and fly fishing on there this year to make up for lack of spring piking.. But it does enable me to fish back on our local lakes at a time of year which traditionally produces the biggest specimen pike. Maybe not the chance of a thirty but certainly a twenty pounder or three should be heading our way and there are also some very big trout around which are more than a little partial to a mackerel tail. So along with a week on L Awe, a return to Norway in search of summer salmon and another Irish bass trip in the Autumn I have a few things to be looking forward to. It cheers me up to get a few dates in the diary- something to look ahead to and it takes the edge off the winter blues. Perhaps.

I still hate January though, Yuk! 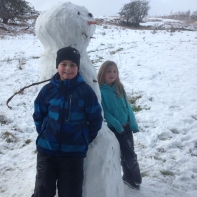 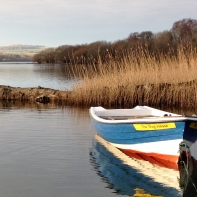 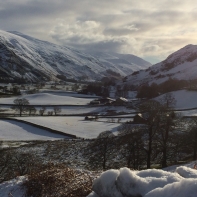 View from our backyard