Well it certainly feels like high summer up here in the Lake District as most recent weeks seem to have been warm, dry and in the main sunny. Even my feet are turning brown! However there is a down side and and with lake surface temperatures in the low 20’s the fish are beginning to feel the effects of three months without any significant rainfall. AS always when the water gets bathtub warm the pike activity begins to slow down till the autumn and to be honest I think they are best left alone in these conditions. Mind you they will feed and the surface lure fishing has been very exciting with lots of epic attacks from fish to low double figures. Jon Dickinson and I had a fabulous day on one of the local waters last week boating a dozen pike on a range of methods as well as five two pound perch all on the fly. We found two emerging weed beds where the shoals of fish were passing through and had one of those sessions where we could do no wrong. One minute it was perch on a trundle rig, then a pike on the trundle then one on the fly and these big perch kept pottering by and all in glorious sunny weather. Just great fishing.

By the way, the water quality on both lake and rivers is as good as we have seen for many years- Bassenthwaite Lake and the lower Derwent are running crystal clear and its is possible to observe shoals of big fish cruising along in ten feet of water. Mrs Hope and I wandered down the other night and spent some time drifting in ‘The Doghouse’ looking down into what Sue calls ‘the wonderful world of fish’ and it was like looking into a Bernard Venables painting, with big perch and pike all there to be spotted. We didn’t even try catching them- sometimes its enough to just be.

On the trout fishing side of things the Derwent is dropping to a basic summer low and we could do with some proper rainfall but I went down the river the other night, and fishing towards dusk had a great couple of hours with trout to two pounds and an epic battle with a very big fish that took a sedge off the top, ran way upriver, dragging fly line and backing, leaped and raced straight back towards me before repeating the whole business again, but then carried on downstream past me at great speed. With the dog in attendance we raced down river in hot pursuit and the fish jumped again on the wrong side of a fallen tree before snapping the leader on a sunken branch!

At an estimated four pounds plus this is a real wild trout and being a tightwad I would like my fly back so I’m off down there again sometime this week.Even If I don’t get the trout, that fight will stay with me for ages. What a fish!

To give an Idea of the calibre of trout in the Derwent at the moment, have a look at the picture of Daniel Appleby in the pictures section. A young member of the Keswick based fishing family, Dan was fishing with his dad and had this one at dusk on a squirrel based fly.,and he put it back after an epic fight!

So in spite of hot weather (which is forecast to break this week) there are some fine fish around.

So get out there …it’s great 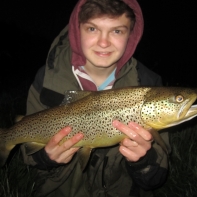 A cracking trout for Daniel Appleby 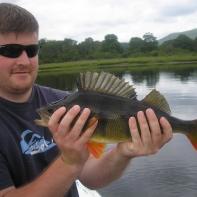 John Dickinson and another fine Perch

Joel Greasley and one of a hundred plus n a day