Its a hard life sometimes being a Lake District fishing guide in the UK in spring. If we are not fighting the weather with windy days and dragging anchors, we are getting sunburned and struggling with flat calms. There seems to be no middle way and it can be very frustrating. When it does all work though it is often a case of patience being rewarded and no better example of this than the other week when Nick McGeorge and his lad Tom came up for a weekends fishing.

Regular visitors to this blog might remember a personal best smile from Tom last year when he boated a fine eighteen pound pike at last knockings on a hard day. Well this time he upped the score a little more. In truth we had a real hard time in testing conditions with nothing at all on the first day, but all credit to the lad he stuck it out and after losing a big fish early on on the second day which I promised not to mention, we tried several other places with little result. As the sun began to set on their weekend and with miles to travel home, we had a pick up on a popped up bait. Nick took the rod and after an interesting few minutes of anchor rope avoidance, we slid the net under a fine 15 pounder. As always when a good fish comes aboard I try and get another bait back into the same area as fast as possible and as the bait sank back out there and we unhooked the pike, the rod was away again. Sliding the first pike in the keep sack we cleared the decks for what was obviously another good fish and after a serious scrap for any angler let alone a sixteen year old we had another cracking pike in the net. At twenty three pounds it was a real belter and apparently on the long drive home Tom slept and snored with a mile wide grin for most of the journey. A fair reward for a long wait on a hard day. This all sounds like a well orchestrated set of events but in fact there was utter pandemonium in the boat but none of us would have missed it for anything. Another case of an awful lot of sitting around for just fifteen minutes of marvelous memorable fishing magic.

Also worth a mention is the fish nabbed by Neil Whipp on another day when little happened till late in the session when the cracking fish shown below came aboard. His mate John had a good mid double and then Mr W lifted into this one. So while the beasties are not exactly coming aboard in great numbers, there are some good fish showing up on occasion. Its a bit like the lottery really- a case of being in it to win and for those prepared to keep the faith…the next one might be the fish of your dreams.

I’m down on Windermere for a little while longer, but as the days lengthen and there’s more boating folk and general commotion around it means its time to move on to other waters and other fishes till the return to the big lake in the Autumn. Besides which there’s trout to catch and the annual trip to Loch Awe to consider…

So perhaps its not too bad being a fishing guide in the UK after all, although it would be nice sometimes to be out on a fast boat hunting Tarpon on the flats in eighty degrees on a Florida morning, slapping on the factor fifty, instead of another damp layer of clothing!!! 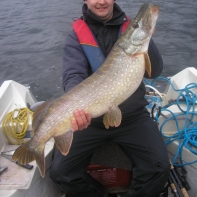 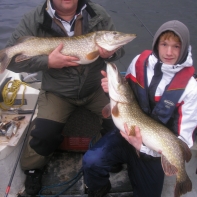 Twos up for the Mc George clan 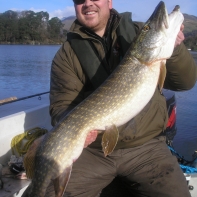 And another goody for Kevin Appleyard. aka ‘The Lamprey Kid’