Here we are at the miiddle of March and its still blowing a hooley! We had few quieter days when the Windermere pike came along to visit but overall we have had to tolerate some pretty wild weather here in the Lake District. I don’t mind wind when I’m trout fishing or casting the big rod for Salmon but when you’re out in the boat on a big lake, strong winds make for difficult fishing.

With a few rods out the inevitable boat swing has a tendency to cause the lines to collect at the back of the boat and we have had a few occasions when there’s been a knitted sock of tangled line coming over the stern. It is all worthwhile though when the wind drops and the pike start feeding. It seems as though the fish tend to seek out the quiet places when there is a big blow at this time of year, so that is where you will usually see the Beagle, sitting in as much shelter as we can find.

I have had to re schedule several days this year due to savage weather and with fuel prices going through the roof life as a boating angler and guide is getting pretty tough. At least we are better off than those folk out in the Ukraine. It was brought home last week when I watched on telly, a family crossing the border into Poland. The man was carrying a rucksack in which I suppose he had packed as much neccesary stuff as he could find in the rush to escape. I have an identical rucksack and he looked not like a stranger from a distant land but like a man I would meet walking through Keswick on a Saturday, and my heart went out to him and the rest fleeing for their lives. I have met a few Ukrainan anglers over the years and they were all good decent folks even if they were often better fishermen and women than us!

Here’s a few pictures of something more peaceful from the winter fishing. 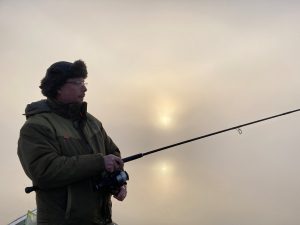 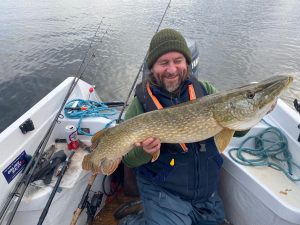 There’s a lot to be said for pike fishing. Stuart Clough and a 16lb fish 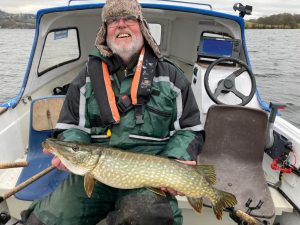 Phil Manchester and one on a calm day

My apologies to Nick Mc George and his mate Matt who came up and enjoyed a most memorable two days . For all the wrong reasons. If anything could go wrong it did and even the pictures of some lovely fish show too much background to post on here. So in spite of some desperate attempts to get on ‘Catch This’ they will have to settle for a short mention and a full chapter in the next volume of ‘Tales of a Lakeland Angler’!!!

Otherwise the spring fishing is coming up fast . I’ll be shifting to Derwentwater at the end of March and look forward to seeing some of you out there. Spare a thought though  for those on the move in Ukraine. Old, warm unused fishing coats might be very welcome. I know where mine are going.