Well its coming up the end of March and with recent snow streaking the fellsides somedays on the water feel more like winter than spring up here in the Lake District. Mind you, when the sun pokes through it can be a stunning place to sit and fish and there are times when it is even warm. To be honest there have been several hard days when I have wished I had been a golf addict or a coach of a different nature but then one of the floats floats sits up and bobs, before sliding away as another unseen beast of the deeps investigates one of the baits deep down on the edge of a Windermere shelf. In that moment as the float disappears or the baitrunner clicks in a dynamic, determined way, all the waiting is worthwhile, and I love it.

We have had some good fish this last month or so and in spite of all the negative publicity surrounding the pike fishing on Windermere, I still love being out there. After all it is still a place with a better chance of meeting a pike weighing over fifteen pounds than below this weight. And there are still some huge fish to be found.

Admittedly it is not as good as it was several years back when we had five twenty pound plus fish in six trips but it is still good, and as we all know, fishing was always better back in the day. Which would suggest that the present is better than it’s going to be in the future, but I am not sure about this as waters do go in cycles and as with the lottery if you ‘re not in it….

Which is why Andy Mac and I will always steal a day in early March. This year we suffered anothe grueller until a mad fourty minutes right at last knockings provided us with two mid double figure fish and a cracking personal best for Andy with a pike of 27.6. I’ll save the photo for another occasion as I have several good fish pictures to post at a later date.

My local fishery Guru resposible for the analysis of the pike and fish stocks in many Lake District waters is firmly of the opinion the things will improve and this is merely a dip in the overall fish bio mass of Windermere .I hope he’s correct as it is a great place to be. So our tally of six twenties over this last few weeks and a good number of upper double figure fish as well as couple of bonus big trout puts the place firmly at the top of my favourite waters. But seasons change and as the lake begins to get busier with visitors and boat traffic it is time to leave the Windermere pike alone for a while. After all, they will still be there in early summer when I’ll be back in June for my two week lure and fly sessions on there!

Meanwhile, the trout are calling and with good hatches of olives over on the Eden a regular feature of the fishing at this time of year, I’m tying up half arse flies ready for the next few weeks of top quality trout fishing. After such a benign winter the fish should be well conditioned and hopefully eager to play. As always I will let you know how we get on. Not bad for a first pike! Kevin Appleyard braves the elements for a closer look at another good pike. 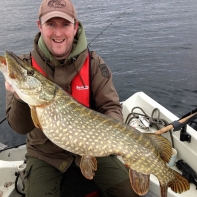 Ciaran Wilson does it again!