I lifted the Doghouse off Derwentwater last week ahead of any possible winter weather events, and as I cleaned the weed from the trailer there was a distant skywards honking as yet another arrowing flight of geese flew in from Spitzbergen. These flights of overwintering birds mark the passing of my seasons in much the same way as the springtime arrival of swallows lifts the mood of an April morning, and as always at this time of year, my thoughts turn to Windermere Pike.

Each year as part of my own seasonal movements I have a few autumn weeks, a spring month from valentines day and a couple of lure and fly fishing weeks over the summer on Windermere, and though the fishing can at times be really hard going I still maintain a deep love of the place.

And so it was that with the Doghouse parked safely in the yard ready for cleaning and repairs, I heaved the bigger winter boat onto the trailer bar and set off with ‘The Beagle’ in tow for the mooring down at Waterhead. According to anglers rumours backed up by evidence from those who carry out the controversial pike netting on Windermere, the Pike population is not what is was a few years ago and huge fish are now a more rare event for we anglers out piking on the lake. But for me this doesn’t detract from the possibilities of hooking into an bigger than average fish and so my excitement continues to flourish as I launch the Beagle and go for a quick look about on the lake. A couple of hours later, having met a couple of hard fighting double figure fish that took a fancy to one of my lures fished over a weedbed twelve feet down, I tied up at the mooring in the rapidly fading light and smiled. Whatever the rumours floating on the wind, it’s good to be back on Windermere.

The previous week I had my annual Barbel trip tp the Wye with my old mate Bob Day. In recent years this has become an event which is always hugely anticipated both because of the fishing which I love, and also because it is such a wonderfully relaxing contrast for me to sit comfortably on the banks of the mighty Wye, touch ledgering for these tenacious fighters while admiring the endless stream of bird life working up and down the river. Most years we do very well with plenty of superb barbel coming along and lots of heart stopping lunges ensue,but this year we had a right old struggle in dead low water. Bob did manage his first double figure barbel as the result of the only bite of the day, but apart from two small chub I nobbled on a trotting rod the first day was right old toughie.

Undaunted, the next day we headed further down to an area renowned for huge fish of all sorts and optimism ran high, but after five biteless hours and a dead looking rock bottom river, Bob reverted to singing a version the War of the Worlds song: “the chances of anyone getting a bite, are a milion to one they said!” Meanwhile I grew restless, and as you can’t take the piker boy out of the man, dropped a smelt into an slowly turning eddy beside a willow. The ensuing scrap of a low double figure fish was more than welcome and at least we avoided the blank. But it was a Wye pike- and somehow that made all the difference.

So now it’s back to serious fishing for a month or so battling the weather and hopefully not too many named storms and lots of big pike.. We have had a benign start to Autumn so far and the fabulous autumn leaf colours are glowing in the late sunshine, lets hope it stays that way! 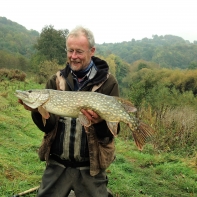 Yes its a Wye pike! 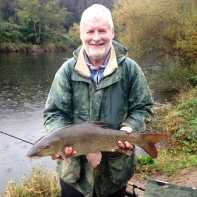 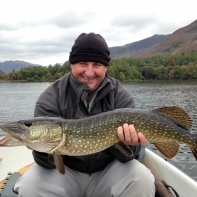 Steve Walsh and a nice one on a lure from Derwentwater