But unfortunately so far it is not the bigger pike that are on the prowl. In spite of several good fish showing up over winter, we are still hunting that elusive thirty pounder from Windermere but with another couple of weeks fishing on there optimism and confidence are at their usual high level. Talking to a few other anglers it seems there are a reasonable number of fish being caught but fewer than average twenty pounders. It will no doubt have something to do with the weather, which has for a change been fairly kind so far this spring. What a difference to last February and March when the ‘Beast from the East’ stopped us all getting out in freezing conditions for several weeks. So far this year there has only been a couple of days of snow to lower levels but instead we have experienced lots of almost Mediterranean temperatures. We all thought this would really bring the bigger fish on the hunt but we are still searching.

I dont really mind too much as simply being out there at this time of year is almost sufficient in itself. There is warmth in the sunshine and water temperatures are rising as the first of the Curlews come up from the coast heading for high moorland. Listening to the bubbling and piping calling down as they drift overhead as we wait for another run, is a great way to lift the spirits after the long nights and short days of winter, and I love it.

On most days the fish are happy to come and pay us a visit and we’ve had more than our fair share of success. Phil Manchester was up for a couple of days and although no personal best on this trip we enjoyed a couple of grand days out with some nice healthy specimens showing up. We have even met a few of the big surprises like the 6.4 brown trout that Dave Mc Cormack nobbled off a deepwater slope at the begining of March. There are some very big trout in most of the Lake District waters and they are partial to a smallish mackeral tail section during early season. What happens to change their habits I don’t quite know but we meet a few of these magnificent fish during the early season and then they vanish untill September. We do occasionally see them taking insects off the top and one of these days I’m going to take a fly rod out and have a serious shot at catching one of them. Imagine that …a ten pound wild brown trout on a seven weight fly rod, over deep water!!

It’s enough to get the most jaded of anglers grinning with anticipation!!

Meanwhile the trout season on the rivers starts in a week or two and my rods are ready, lines sorted and waders checked out for leaks .I ‘ve even tied some half arses. snipe and purples and a few other north country specials in readiness….I love this fishing lark. 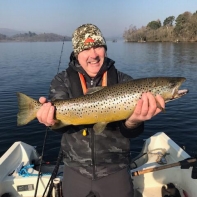 THis one took a mackeral tail. 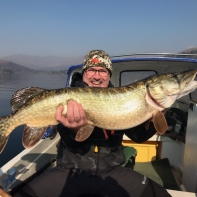 and the lucky captor also had this one 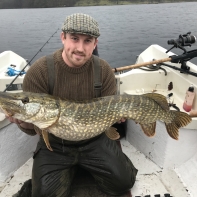 But these are the ones to bring a smile!