There are times in life when I really do think I’m suffering some sort of early onset daftness. Probably known hereafter as ‘ODD’ but it does make me wonder when for all sorts of perverse reasons I do actually look forward to the frustration and delight that is Winter pike fishing.

This last few weeks have been perhaps as good an example of this as I could imagine. Having dragged the Beagle down to my favourite big local lake, settled her on the mooring I got the rods out and set out for a quick sortie to see what was lurking in the depths. With the water temperature around 9 degrees and the lake calm and still, all seemed set for a few days great fishing and my usual optimism was kicking in big style. Unfortunately on the way home I then listened to the weather forecast. Settled and fair said the weatherman until the next weekend but then deteriorating as the first named storm of the year came in. Great!.

In spite of extra water and the usual wild winds we had a few superb days fishing of which Leigh Thornton made the best of it with a couple of grand days exploring a few different areas. As often happens on big exposed waters it’s a case of avoiding the worst of the winds and weather to ensure the day doesn’t turn into a nightmare of tangles and muttering. In my experience, calm waters in late season often produce the goods and so it proved with a couple of fine fish including a beautiful sixteen pounder and a 20lb 12oz personal best for Leigh. Best of it all for me was that these came from an area off the beaten track of most anglers, so another spot ‘x’ tucked away in my head for similar wild days in the future

By the Friday the forecast had become even worse and so with over six inches of rain predicted I brought the boat home again. Good job I did as by Saturday night the mooring jetty was five feet under water and Windermere had spread into the car park at Waterhead. It takes a lot of rain to lift eleven miles of water to that height and when the boat was returned later that week I had to wear chest waders just to get unto the boat and the public jetty was still under a foot of water! . Once upon a time I would have been seriously despondent and put off by all this extra water but sometimes I think it can work in the anglers favour as in the autumn it can encourage a run of migratory fish up the inflowing rivers. Pike are somehow aware of this and so over the next couple of days we had some good specimen fish and a peculiar angling event. I have talked about re captures and feeding times before in this blog but last week we had a very weird one…

Mike and Val were up for a couple of days and did very well under the circumstances but one of the fish was a 19.12 caught at twenty past one off a favourite lunchtime swim. With a slight growth on one side of its lower lip it was a distinctive fish and fought like the clappers. Next day we were in the same area and had another run. Guess what….yep, same fish on a different bait and the time….nineteen minutes past one! Maybe like anglers who fish the same spots every time they go out, some fish are a bit dim and creatures of habit but yet another reason for treating them gently!

Thanks for those who came along to the two talks I gave recently at region 31 and Carnforth. Great to meet you all, I hope you enjoyed the evenings and well done for braving the weather. 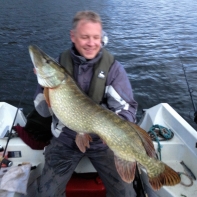 A pb for Mike Heljula 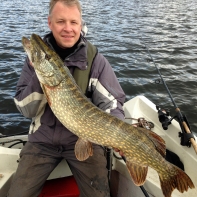 And another big un on the same day 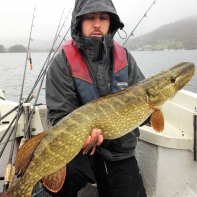