Well all good things come to an end and after some great fishing sessions on Windermere, the Beagle has been taken north until the lake quietens down again in the Autumn. There’s always a tinge of sadness as I haul her back onto the trailer but in some ways its good to be back to a more varied angling lifestyle and instead of sitting drinking tea, watching floats and waiting for the fabled beasts of Windermere, we’re back out trout fishing, as well as lobbing lures and fly fishing for pike. Best of all it gives my arms a rest from hauling anchors from 40 feet of water and landing bigger than average pike. Having said that it has been an interesting spring with varied levels of success and some strange water and weather conditions. After a productive start back in February the fishing slowed down for a while and I had to suffer a few consecutive blank sessions, which are never good but are an unfortunately inevitable part of chasing big pike. After one such day I phone my brother and he asked how we had been getting on.

“Well, I said we have had two blanks this week, really hard going”

“And before that?” he enquired,

“And you are complaining ?”, He said, ” when we fished South West Scotland a few years back we would have been buzzing for months after catches like that!”

And he was absolutely right. It is easy to get complacent and although we didn’t manage to meet any real big pike, and suffered some difficult days, when I look back through the diary and see a final tally of well over thirty pike of which 25 were over 16 lbs and included three twenty pound plus fish, I understand just how fortunate we are to have such quality fishing up here in the Lake District.

But as days get longer Windermere gets very busy and I don’t like fighting the crowds of boats down there. And anyway, with the onset of warmer days the trout are feeding well down the river with some fine wild brownies showing up, on the lakes the pike are finishing spawning, and Loch Awe is looming.

So dust off the rods and get the waders out, Its spring!!! 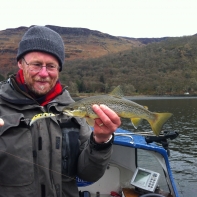 One on a wiggler.. 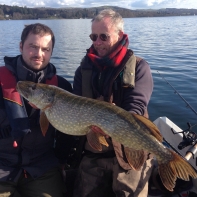 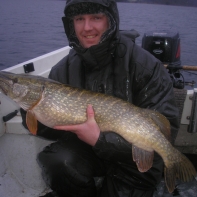