It is the time of year where I leave the perch to their deep water devices, put the salmon rods away till next season, and return to Windermere for a few weeks of Autumn pike fishing. Historically this is where we meet some of the biggest of the Lake District pike and although dead bait fishing is the usual option in the Autumn, providing the water has not cooled right down we still get more than a few on lures as well, and the best of all is that as always on this fabulous water, you never quite know what you are going to meet.

I was down there the other day on an outing with a father and son team who were eager to learn a few of the tricks to finding some of the better fish in Windermere and gain a little knowledge of the sort of places to begin looking for pike. Now obviously I don’t give all the secrets away but I am always happy to improve folks angling experiences,so I met them down at the southern end where they had moored their boat for a few days fishing. With some experience on boats it seems they are regulars on Rudyard Lake down in Staffordshire, and whilst Rudyard in its way is a decent sized water it is small by comparison with Windermere and far less likely to blow up rough and wild in a gale and so I was delighted that the morning in question was the start of a perfectly calm and mild Autumn day. This is always useful when I’m out in a strangers boat as I tend to be careful these days in an unfamiliar vessel. Lifejackets and weather forecasts are always checked before such trips. I know what my own Orkney can take in terms of wild weather and fear very little in the Beagle, but other folks boats?….Hmmm

As it turned out ‘Mr Blue’ is a fine two man craft, perhaps in need of a bigger engine but fine for the day we were out. Exploring a few good areas we had a couple of small pike but it was slow going. Their previous biggest Windermere fish was around the ten pound mark so I was reasonably confident we might meet something slightly bigger but by lunch time we had little but smallish ones. Undaunted we explored a few other spots and I figured the fish might still be in the vicinity of the old weedbeds. Not actually over them as most of the weed at this time of year is rotting back which I reckon makes uncomfortable territory for pike, so we fished the drop offs.

Both father and son are keen lure anglers so although we looked at the rigs and tactics for bait fishing, it was the lure rods that were out first, choosing suitable lures to get well down to where I hoped to find a few fish. And boy did we find a few pike. By the end of the day we had four jacks, a 14 lb cracker and three big upper doubles. I’m not really into weights as I just enjoy the fishing and especially the moment of the take, and anyway my first priority is always to get the fish back as quick as possible, but with two personal best pike for the ‘boys’ and a 19.14 for yours truly it was a cracking days fishing.

So I’m sort of looking forward to getting back down there next weekend!!!!.. 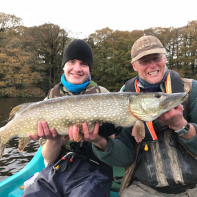 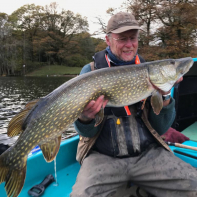 And even I managed one! Another beautiful Lake District Pike