It’s the run up to clocks back and most of the trees are dressed in their Autumn finery -at least till the first gales strip them bare and fill the rivers with leaves. With the trout season being over there is some good grayling fishing to be had up here and the other day after an futile attempt to catch a Derwent salmon in very low water, Bob Day and I went to the Eden hunting Grayling. I like grayling for many reasons, not least of all because they are usually very obliging, put up a good scrap and grow to a decent size round here.

With all the dry weather of late the Eden was on its bare bones and with another bright day forecast we headed to the Edens major tributary the Eamont, hoping water from Ullswater would have kept the river at a reasonable height. Wrong again! It was as low as I have ever seen it and apart from an odd restless salmon rolling in frustration there was little moving. A wander upriver found us watching some very small sipping rises tight along the sandstone cliffs that are a feature of many opposite banks on this beautiful river, so choosing a suitable fly from the favourite suspects box we set about catching a few of the feeding fish. It is one of Anglings great wonders that on occasion, the usual flies just do not work and so it was that later as we ate our lunch at the car we were both fishless and a little puzzled. Smaller we decided would do the trick so into the fly boxes again looking for something suitably tiny to try. One day last year we’d been up on the Annan at this time of year and did very well with small claret Simpletons- insignificant dry flies of around size 16, so Bob had tied a few up in case similar conditions pertained, and thank goodness he did.

It always amazes me how focused on a particular size of fly, fish can become, and this day was no exception. First cast with the new approach and Bob was into a good fish. No Grayling but a feisty out of season trout around 14 inches. Second cast and another fish but this was a different kettle altogether. Eventually I slid the net under the cracking late year trout in the picture below- nice!

As to the grayling, well we had one- a superb fish of at least five inches, but over a dozen out of season trout which were all in fine fettle, after all not all fish spawn every year and some overwinter very well indeed. Without exception they all took tiny dry flies and once again we learned a little more about the strange ways of fish.

Next day I was out on Bassenthwaite with Phil Done and in spite of bright clear conditions we enjoyed one of those fabulous Autumn days drifting quietly round the beauty of the northern Lake District. Best of it was that for a change, the pike were feeding in spite of one worrying fish on the first cast ( never a good sign) we ended up with ten pike up to 15.8 on almost every tactic we could think of including the legendary dangled deadbait. This was a smelt hung off the front of the Doghouse while we fished lures on the drift in about six feet of water. Amazingly, on two occasions we watched fish come up, gently pick up the bait and swim off with it! One was just a six pounder but the other was a belting mid double figure fish that gave us a proper run around fight . To watch the approach and then the take was fabulous fun. Yet another reason to go pike fishing in Autumn!

I’m off to the Wye next week for a look at a few Barbel but might just stick a pike rod in as well…I’ll let you know how it all goes.

Meanwhile enjoy the fishing, either the real stuff or the Big Fish series on Sundays at 8 on Beeb 2 with Matt and Mr Fogle, where in spite of being a bit formulaic, it is a good series and equally good to see Angling back on prime time telly.

And as a final bit of interest to those of you who have been out on Derwentwater with me…check out the trailer for the new Star Wars movie- just after the Harrison Ford bit are a couple of great fast shots of the lake…spot fishermen between weaponry and who said nothing ever happens in Keswick !!! 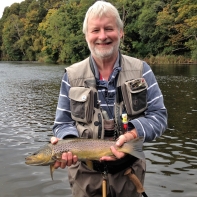 Bob Day with a fine fish that ignored the rules 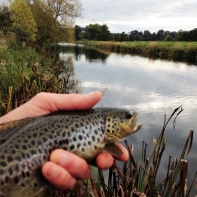 Another out of season spotty on a tiny dry 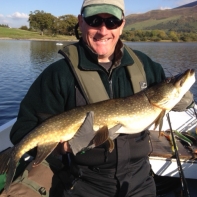 Nice double for Phil Done on a DD rig.