Regular visitors to this site will know by now that given the chance, one of my favourite occupations is fly fishing for salmon and on some occasions I do actually catch one! Which much to my amazement is exactly what has happenned this last week.

After all the dry weather over the summer when rivers have been absolute rock bed low we have had a few serious deluges and as the water has fallen there’s been a few salmon around. Now before folk get all excited that there’s loads of fish and we are back to the good old days when salmon were abundant, let me put the record straight. There are salmon in our river but they are hard won and in three days serious salmon fishing on the Eden, Annan and Derwent, Bob Day and I only saw two fish and both were on the end of my fly line. Sorry Bob!

This does underline how poor the runs of fish actually are these days, for in spite of all our efforts to improve things for these fabulous creatures during their time in the rivers, and sensible anglers returning most of the salmon they do catch, the numbers are way down on what we used to have. This is not just rumour because if salmon are around they do show themselves by leaping and rolling even if anglers are not catching them, but as I said earlier, we are not just not seeing fish and after all you cannot catch what isn’t there. Several other anglers we met all told the same despairing story and a few good hands down on the Eden have had a totally blank season.

A week earlier though I had a great day on the Derwent with Robert Lattimer when as well as missing one and catching a couple of brown trout he had a lovely hen salmon of around ten pounds on the fly which we photographed and put back. A first salmon and very well deserved to a man who has taken to the big rod and spey casting like he was born to it. So there are a few around and I’ll hopefully have a few more chances at catching another before the season finishes at the end of October. The Keswick waters have produced about twenty fish so far and although mostly small five or six pounders, there might be some biigger ones in there. As with all my salmon these days though, if I am fortunate enough to catch a fish or two, I put them back.

I see Anglers Mail are stuck for stuff to write as this last weeks edition has a big feature about trundling for perch with yours truly! A decentish balanced article for a change. They were coming to do a feature on the lake and although I dont need the publicity I didn’t want to see another ‘Home of Record perch’ headline, but became involved as long as they stuck to pushing the fun aspect of angling. Fair play to Steve Collett and Ian Chapman as they did a fairly balanced lighthearted job.

I am writing this on a wild and windy day when I’m blown off the lake as Derwentwater has a four foot swell coming down and sadly for Marcus Corr and his dad Mark, the birthday treat might have to wait for a calmer occasion.

Otherwise, Here’s to November and some good pike fishing on Windermere,

A sad bit now, for as were setting up the Game Angling Instructors Association stand at the recent Fly Fair over at Rheghed near Penrith, we heard of the sudden death of my not so old mentor Mike Roden. A larger than life character and one of lifes good guys he was only 55 and got off his bike at the top of a hill, and that was it, taking the empties back via a massive heart attack. So do as much good as you can and enjoy your days cos you do not know whats round the next corner. 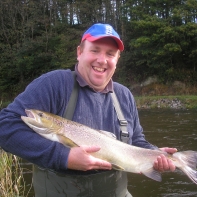 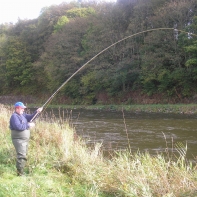 Cool, calm and Quaking on the Derwent 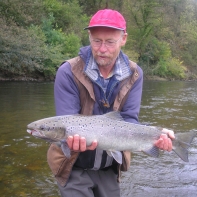