Well, for the past few weeks weeks we have been down hunting pike on the big pond known as Windermere and as usual had some great days fishing. For those who don’t know, most of the big pike shown on this site are from either Scotland or Windermere as Derwentwater and Bassenthwaite just do not produce monster pike specimens in great numbers these days. But if you know where to find them there are some fine fish in Windermere. Kev Langham and his mate Ian came up in June and experienced three days of cracking lure fishing with some fine hard fighting double figure pke …and a few that that got away!

You know those rare days when you are expecting something ..any second…

This was during that period of deep low pressure when the rest of the country was having severe floods and savage weather and we were enjoying overcast and warm fishing conditions when most of the pike were over ten pounds, including one at 18.12 and lots around fourteen pounds.

We even almost got arrested!

Apparently someone has called the Environment Agency hotline with a report that a boat with my registration number was using a net to catch fish. I suspect we were seen throwing out the drogue to slow the boat down and to those who don’t know what a drogue is it could look like a net being deployed. Even though the EA and I work together sometimes teaching youngsters to fish they are obliged to follow up on calls to the hot line. Which is why we were a little surprised when they came steaming up towards us looking like serious men on a mission . Which I suppose they were!

After a good crack about the state of the water in general and char in particular they left us in peace, but it made for a few interesting moments and as the baliff is a char fisherman of note, I learned a bit more about char behaviour which might come in useful one of these days.

Over a four week period we had lots of really healthy pike to the boat on fly and lures (best 20.6 lb ) which is a fair result by anyones standards and some very happy anglers indeed.

But all good things come to an end, and as the water warms up pike find it hard to recover after a fight so I tend to leave them alone and focus on other species until October when most of the visitors are gone and its back to pike fishing once again. And so,with the perch season upon us it was time to get the boat back to the northern lakes and start looking for the specimen stripeys for which the Lake District is famous. Most summers see us catching plenty of fish to two pounds plus with a few much bigger ones as well. Three pound perch are magnificent fish and we do meet a few of them. It’s just a great way to get youngsters into fishing with lots of bites and a few anxious moments when they hook into a big one. And so here we go again with a thousand worms waiting in the compost bin and a boat load of enthusiasm we say tarra to the big pike of Windermere and hello to Mr Perch.

And so for the time being, its goodbye to Mrs Pike ( Don’t tell ‘em!) and tarra from me. 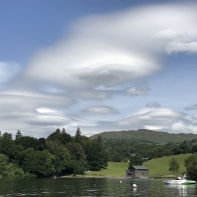 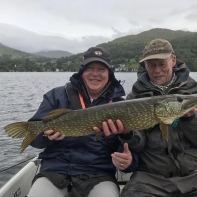 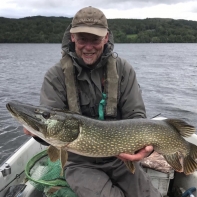 It’s not always wise to let me have a cast!!