Aren’t we lucky lads- ? The annual trip to Loch Awe has been Something Special in the diary for months and we look forward to these trips away with a huge amount of enthusiastic optimism and the feeling that this time we might just, maybe, perhaps, catch the fish of our dreams. It almost occurred last year when I lost one of the biggest Pike I have ever hooked when it just came unstuck a long, long way and several heart stopping moments across the loch from where I first hooked it.

But this year was going to be different, four anglers, two good boats, a barrowload of baits and a solid weeks fishing.

Unfortunately we took a first rate chef with us and in spite of the first night catch of a couple of upper doubles we didn’t read the signs right and worked our fishing around the superb food prepared and served by Dale, aka “Chef”,at the tail end of the days. If we had been wise we would have fished early and late , slept a bit more during the day and caught more fish but as it was we didn’t and I ended up well over a hearty half stone heavier !

But while it was brilliant in its way, as the title suggests it was at times, utterly brutal.

The first evening settled calm and peaceful with fish feeding and a level of optimism not seen since Fat Nasty the Wimp and I hit Kilchurn castle way back in the seventies, but by Tuesday things changed. We woke up to that bitter arctic blast that spread across the land bringing snow and frost to many parts of Britain. Although we missed the worst of the snow, the hills turned deep white and the Arctic wind went straight through all our layers- Windermere in February? It’s Easy compared with Awe in April!. Undaunted, we battled it out only losing half a day when we simply couldn’t cope any more .That morning with a steak barbeque planned for lunch, Phil and I had been sitting freezing our lumps off in cold snow and sleet on the outer edge of a small bay, with nothing but a short dropped run to our score when the wind picked up.and as three foot white rollers pushed down the loch we feared for the safety of the others out in Dales boat a mile away down the Loch. Scraping the snow off the rods we reeled in and headed down wind towards the far distant bay where Dales and Andy boat sat lurching in the squally wind. Now both Andy and Dale are experienced anglers well used to coping with some pretty epic weather but as the Beagle pulled slowly along and a little off to one side of the floats it was two very grim looking anglers who looked back at us across the water. I’m sure Winston Churchill would have had appropriate words but the look on the lads faces said more than any statement, and we shadowed each other back across the freezing Loch Awe to the sanctuary of hot baths and warmth.

But by the end of the week we’d managed a creditable 49 pike with the best yet again coming to Andy Mac at 19 .8. with several other upper doubles and just a smattering of jacks and yet again, in spite of all the hardships, the cold, the misery and the appalling weather, we had a brilliant time. Most of all we ate like Lords, laughed as much as is good for us, and fished our socks off.

And whatever I said before about this being the last one…….I can’t wait to get back up there for another proper adventure.

You’re all heroes in my book. 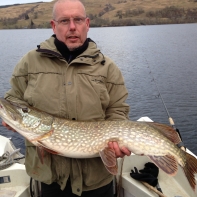 Andy Mac Shows how to do it again! 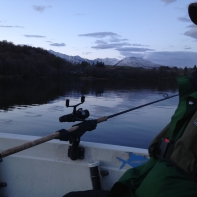 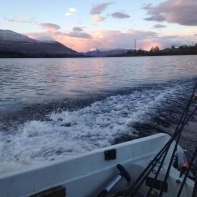