Here we are in the last days of January.  The winter drags on, cold wet and miserable with clouds trailing wet coat tails of mist across the fellsides. Under normal circumstances  I would be working on the boats getting them varnished and ready for the new season ahead. But this year is different.  With the extended lock down it looks as though even launching a boat before April is unlikely to happen. Which is a pity really as I have installed a new sonar and bilge pump on the Beagle and serviced engines on both Beagle and Doghouse ready to go. I’ll still be having a day or two salmon and trout fishing once their seasons start, but till then I dream of February fishing, and pike…..

I have often thought that if I ever won the lottery, I should like to fish some of the best places in the world at just the right time of year to experience the best of the fishing that water has to offer. This may well include Florida in April for the Tarpon, Russia at any time for the salmon, tropical island fishing in winter for bonefish, summer sturgeon in BC or autumn barbel on the Wye. Along with the exotic destinations where warmth and strong sunshine light the anglers’ days, one of the annual events shaping my lottery winners’ calendar, would most definitely be two weeks spent in the Lake District at the end of February and into the first weeks of March.

Even though this time of year can often be cold, the weather unpredictably bad and there will no doubt be times when the whole exercise might seem a futile pursuit, there are also moments of priceless enjoyment. When the morning sun burns through swirling mist on a calm Windermere, and the curlews’ burbling call floats over the fields behind Wray Castle to pipe in the approaching spring, just being there is almost enough in itself.. Always present though is the real possibility of catching a very big, truly wild pike in stunning surroundings. And against a backdrop of mountain reflections, we gaze at a red topped pencil float, angled against the water in the distance. There are usually a couple of other rods out as well, so we sit back and watch the floats. Each one has a slightly different bait or presentation lying and deceitful down below on the lakebed.  And we wait. Time, the world, and conversation drifts easily by, then without warning one of the floats dips once and stands up. Fourty feet down, a pike is examining the bait. On the surface we watch and wait as the angled float drops flat, lifts again, and stops for a moment. Time and the world slows down. Then the float moves purposfully across the surface dragged by something unseen. Then the float slides under as we lift the rod and tighten into the fish.

As the rod tip is pulled waterwards, the pike and I introduce ourselves.

But it is seven in the morning and the alarm has gone off, waking me into another day of lockdown routine and  this years dream of February pike fades away. 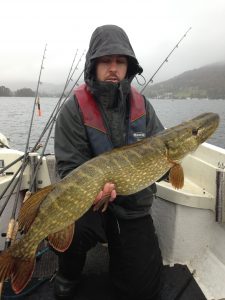 Hopefully we’ll be out in due course but till then,