Well its has been an exceptional summer up here in the Lake District with hardly any rainfall at all for almost three months. As a result it has been an odd summer for fishing with both air and water temperatures way above normal and lakes and rivers down to absolute rock bottom. No surprises then that the salmon fishing has been poor, trouting tricky unless you are a nocturnal angler, and pike fishing very hard work indeed. So thank heavens for the humble perch which as regular visitors to this site will know provide good reliable sport for kids of all ages through the warmest of summers. We have also met some fabulous roach as well when perching as the population in both neighbouring lakes has blossommed in recent years. Several days have seen us catching fish to well over the pound on deep water quiver tip tactics and while not to everyones liking they do make for great fishing sport when little else is occuring or between groundbaiting and the perch shoving their way into the swim.

With the extended warm weather the perch shoals have shifted from the usual shallowish larder areas and we have had to track them down. So instead of sitting it out in river mouth swims, the best of the fishing has been where the lakes shelve away to 30 + feet. As the year progresses into Autumn they have continued to feed and we are still catching some good two pound specimens. Best of all is that with recent falls in water temperatures the pike have begun to waken up a little after their summer holidays and we’re picking up some nice fish on baits fished to the edge of the perch swims. No real beasts yet, but several fish to low doubles such as 8 year old Aston Shanks’ pike and a jammy seventeen pounder on Bassenthwaite to a 2.5” jig intended for perch. On 5lb line this was a real epic and not for the nervous. By lunchtime we’d only had this and a 2.6 perch but we found a few more in the afternoon including the pb. fish shown below for Geoff Hornby.

On the game angling front Bob Day and I were booked in for a days salmon fishing on the Annan the other week but with the river very low went dry fly fishing instead. We only saw one salmon but several decent grayling, a handful of trout and three bonus sea trout on very tiny dry flies made for a very entertaining session and just goes to show that putting a trout rod in with the salmon stuff can turn aparently hopeless fishing into a successful day. Hopefully, with heavy rain forecast for this coming weekend we will be able to get hold of a couple of salmon over the remainder of the month. Of course I’ll return them as these great fish are in short supply these days and I love watching them swim away to continue their journey.

Beyond that I’m off to the Fly fishing Expo at Rheghed Centre near Penrith this weekend with the GAIA stand doing demo stuff, tying pike flies and the deadly Half Arse so I might see some of you there. Best of all and while not wishing my days away, is that November is fast approaching and with it the delight or otherwise of Windermere pike fishing. We did very well last season and it will be good to be out in The Beagle watching floats and drinking fresh brewed tea as the year grows old.

I’ll let you know how we get on, there’s a few days still unbooked (but not many) so if you fancy a look out there drop me a line.

Otherwise, get ready to turn the clocks back, dig out the thermals, stoke the fire and and settle into winter mode once again. 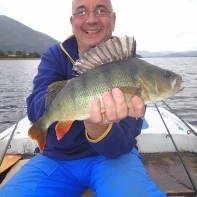 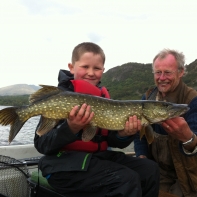 Not bad for an eight year old boy !